She was nominated for an Academy Award in 1931 for her role in Holiday, in which she played Linda Seton. | Her film: The Life of Vergie Winters (1934), portraying an unwed woman who carries on an illicit love affair with a married man and bears his child, was banned in Chicago and placed on the Catholic Church's films to be boycotted. | Unlike most film stars at that time, Ann dressed down off-camera and had little concern for her outwardly appearance. She often attended premieres without makeup or fancy hair-dos. Gossip maven Adela Rogers St. Johns claimed that Ann was "...the worst dressed woman I ever saw in my life!". | She joined the NAACP in 1934, having been disgusted by what she considered racism in her movie Prestige (1931). In 1935, she attended a benefit in support of the group's anti-lynching bill. | She was awarded two stars on the Hollywood Walk of Fame, for motion pictures at 6201 Hollywood Boulevard and for television at 6850 Hollywood Boulevard in Hollywood, California. 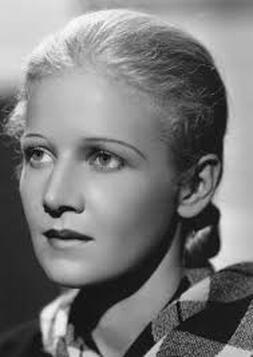 Ann Harding was born Dorothy Walton Gatley on August 7, 1901, in Fort Sam Houston, Texas. The daughter of an Army captain and his wife, Ann spent a lot of time traveling around the US whenever her West Point-educated father was transferred. Moving to such places as Illinois, Kentucky, New Jersey, Cuba and Pennsylvania made it very hard to put down roots.

By the time the family settled in New York, Ann was well out of high school and began work with the Metropolitan Life Insurance Co., her college education put aside due to financial difficulties. She already had some stage experience in a couple of productions when she was a high-school student in Pennsylvania, but that was as far as it went. She left the insurance company welfare division when she went to work as a reader with the Famous Players-Lasky Co. After attending a play in New York City, Ann discovered that the acting company was holding auditions for a part, and she decided to give it a try.

She was asked to come back the next evening and read for a larger part; to her surprise, she won it. She received critical acclaim for her role in "Inheritors" (1921) and decided she would continue her budding career. Her father was less than pleased with Ann's decision, but she felt it was her life and she would decide what was right for her. For the next eight years Ann performed in a variety of stage productions--after all, she was Broadway's bright new star. Ann was signed by Pathe Studios in 1929 and made her film debut, as "Mary Hutton", in Paris Bound (1929), co-starring with Fredric March.

Later that year she starred with her husband Harry Bannister (whom she married in 1926 and divorced in 1932). Her role in Condemned (1929), for which she was loaned out to United Artists, rounded out her work for that year. Back at Pathe she starred in Holiday (1930), the film that solidified her image as an actress. Next up was The Girl of the Golden West (1930), which again had her husband in the second role. Ann was loaned out to Fox to play Lady Isabella in East Lynne (1931). During production her husband would show up on the set and try to tell the director how to run the film. He was finally banned from the set, and it hastened the demise of Ann's marriage to him. In 1932 she appeared in four films--Prestige (1932), Westward Passage (1932), The Conquerors (1932) and The Animal Kingdom (1932).

Four more followed in 1933. Ann didn't appear in as many films as a lot of her contemporaries did, because she was very careful in choosing the roles she played. She was more concerned with quality than quantity. After appearing in the British-made A Night of Terror (1937), Ann took a five-year hiatus from acting, not appearing on-screen until Eyes in the Night (1942). After Christmas Eve (1947) in 1947, Ann didn't work for three years, showing up second-billed in Two Weeks with Love (1950). She followed that with The Unknown Man (1951) but took another five-year break, until appearing in Strange Intruder (1956) and The Man in the Gray Flannel Suit (1956), which turned out to be her last big-screen appearance.

“I believe that the actress who wears her profession on her sleeve, as it were, outside of her work, is, as a rule, merely dramatizing herself. When she acts off-stage as well as on, she is wasting her talent. It is like using nectar to quench a casual thirst.”