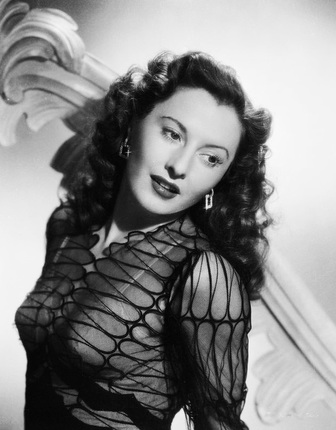 In an industry of prima donnas, actress Barbara Stanwyck was universally recognized as a consummate professional; a supremely versatile performer, her strong screen presence established her as a favorite of directors, including Cecil B. De Mille, Fritz Lang, and Frank Capra. Born Ruby Stevens July 16, 1907, in Brooklyn, NY, she was left orphaned at the age of four and raised by her showgirl sister. Upon quitting school a decade later, she began dancing in local speakeasies and at the age of 15 became a Ziegfeld chorus girl. In 1926, Stanwyck made her Broadway debut in The Noose, becoming a major stage star in her next production, Burlesque. MGM requested a screen test, but she rejected the offer. She did, however, agree to a supporting role in 1927’s Broadway Nights, and after completing her stage run in 1929 appeared in the drama The Locked Door. With her husband, comedian Frank Fay, Stanwyck traveled to Hollywood. After unsuccessfully testing at Warner Bros., she appeared in Columbia’s low-budget Mexicali Rose, followed in 1930 by Capra’s Ladies of Leisure, the picture which shot her to stardom.

Reviewers were quite taken with her, and with a series of successful pictures under her belt, she sued Columbia for a bigger salary; a deal was struck to share her with Warners, and she split her time between the two studios for pictures including Miracle Woman, Night Nurse, and Forbidden, a major hit which established her among the most popular actresses in Hollywood. Over the course of films like 1932’s Shopworn, Ladies They Talk About, and Baby Face, Stanwyck developed an image as a working girl, tough-minded and often amoral, rarely meeting a happy ending; melodramas including 1934’s Gambling Lady and the following year’s The Woman in Red further established the persona, and in Red Salute she even appeared as a student flirting with communism. Signing with RKO, Stanwyck starred as Annie Oakley; however, her contract with the studio was non-exclusive, and she also entered into a series of multi-picture deals with the likes of Fox (1936’s A Message to Garcia) and MGM (His Brother’s Wife, co-starring Robert Taylor, whom she later married).

Her stormy marriage to Frank Fay finally ended after a drunken brawl, during which he tossed their adopted son, Dion, into the swimming pool. Despite rumours of affairs with Marlene Dietrich and Joan Crawford, Stanwyck wed Robert Taylor, who had gay rumours of his own to dispel. Their marriage started off on a sour note when his possessive mother demanded he spend his wedding night with her rather than with Barbara.

William Holden was considered to be too lightweight for the lead role in Golden Boy (1939), but Stanwyck urged producers to keep him in the picture and it was through her efforts he was kept in the picture, and the role made him a star. In 1978, at the The 50th Annual Academy Awards (1978), before starting the presentation of the sound award, Holden publicly thanked her for what she did. She nearly broke down in tears and kissed Holden, and the exchange received thunderous audience applause.

[In 1939 on the fact that her fiancé, Robert Taylor, was four years younger than she] "The boy's got a lot to learn and I've got a lot to teach."