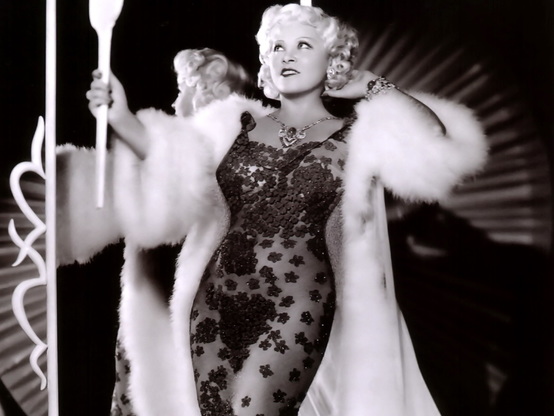 A seductive, overdressed, endearing, intelligent, buxom, sometimes vulgar blonde actress and sex symbol with drooping eyelids, Mae West featured a come-hither voice, aggressive sexuality, and a genius for comedy. She began working as an entertainer at age five. After a few years in stock she moved into burlesque, where she was billed as "The Baby Vamp."

She began working in vaudeville and Broadway revues at age 14; she was the first to do the "shimmy" on stage, and she also appeared as a male impersonator. Between 1907-18 West often re-wrote her material and began thinking of herself as a playwright. In 1926 her first play, Sex, which she wrote, produced, and directed on Broadway, caused a scandal and led to her imprisonment on Welfare Island for over a week on obscenity charges.

She wrote and directed her second play, Drag, in 1927; about homosexuality, the play was a smash hit in Paterson, New Jersey, but she was warned not to bring it to Broadway. Finally, she had a legitimate success on Broadway with Diamond Lil in 1928, and, after two more successful stage productions, she was invited to Hollywood. With a reputation as a provocative sexual figure, she was watched carefully by the censors and often clashed with them; still, she managed to inject much sexuality into her films through innuendo and double entendre. For most of her films she wrote her own lines and collaborated on the scripts; her witticisms and catch-phrases soon entered the speech of mainstream America.

Having debuted onscreen in 1932 in Night After Night, by 1935 she was the highest-paid woman in the United States. Throughout the '30s her films were anticipated as major events, but by the end of the decade she seemed to have reached her limit and her popularity waned; puritanism was on the rise and censorship was severely limiting her career. After making The Heat's On (1943), she planned to retire from the screen, and went back to Broadway and on a tour of English theaters.

In 1954, when she was 62, she began a nightclub act in which she was surrounded by musclemen; it ran for three years and was a great success. By now a legend and cult figure, she went into retirement. She appeared in two more films in the '70s. She is the author of an autobiography, Goodness Had Nothing to Do with It (1959).

Trivia:
According to actor Tony Curtis, her famous walk originated while beginning her career as a stage actress. Special six-inch platforms were attached to her shoes to increase the height of her stage presence. Her walk literally was "one foot at a time."

During World War II, United States Navy and Army pilots and crewmen in the Pacific named their inflatable life vests after her, supposedly because of her well-endowed attributes. The term "Mae West" for a lifejacket continues to this day.

Appears on sleeve of The Beatles "Sgt Pepper's Lonely Hearts Club Band". West at first declined to be pictured on the cover ("What would I be doing in a lonely hearts club?!"), but reconsidered when the Beatles sent her a handwritten personal request.

Former Beatle Ringo Starr appeared with West in Sextette (1978). He was unpleasantly surprised at first, at all the attention given her on the set (usually reserved for pop stars like The Beatles), but came to admire West during the shoot, and praised her afterwards.

Was banned from NBC Radio after a guest appearance in 1937 with Edgar Bergen and Charlie McCarthy that was loaded with flirtatious dialogue and double-entendres. She returned to the network as a guest on the "Perry Como Show" in 1949.

Turned down a role in Elvis Presley's film Roustabout (1964), which eventually went to Barbara Stanwyck.

The Coca-Cola bottle was said to have been designed with Mae West's figure as inspiration.

"It's better to be looked over than overlooked."

"Men are my life, diamonds are my career!"

"When women go wrong, men go right after them!"

"When caught between two evils I generally pick the one I've never tried before."

"I wrote the story myself. It's all about a girl who lost her reputation but never missed it."

"It ain't sin if you crack a few laws now and then, just so long as you don't break any."

"A dame that knows the ropes isn't likely to get tied up."

[on Marilyn Monroe] "The only gal who came near to me in the sex appeal department was pretty little Marilyn Monroe. All the others had were big boobs."

"My advice for those gals who think they have to take their clothes off to be a star is: baby, once you've boned, what's left to create an illusion? Let 'em wonder.I never believed in givin' 'em too much of me."

"Virtue has its own reward, but has no sale at the box office."

"I was in the office at Paramount, and they gave me a large book with a lot of photographs of different leading men, and I was sitting at a table or a desk right near the window and the door, and uh, after I looked at a few I kind of glanced out the window and I saw this good-looking guy walk across the street. So, I said, "That's about the best-looking thing in Hollywood: who is he?" So they looked, and they said, "Oh, that's Cary Grant. We haven't used him in a picture as yet, but we made tests of him with some of the starlets." I said, "Well, if this guy can talk, I'll take him." So they called him in, and we met, and he said, "How d'ya do?" and I said, "OK." And they said, "What part?" and I said, "The lead, of course." So he got the lead."
Explore the simpler time of yesteryear...
A time when men and women were truly glamorous. A time when you could watch any movie with your children and not have to worry about gratuitous sex or violence – yet enjoy all the lustful inferences and edge-of-your-seat suspense.
Welcome to The Timeless Theater!
We're in the process of identifying which of our films are in the Public Domain, and offering these for sale on DVD.
​Please stay Tuned...!
Check out our new Film Noir Collection:
Coffee Mugs!
Phone Cases!
iPad Cases!
More coming soon!