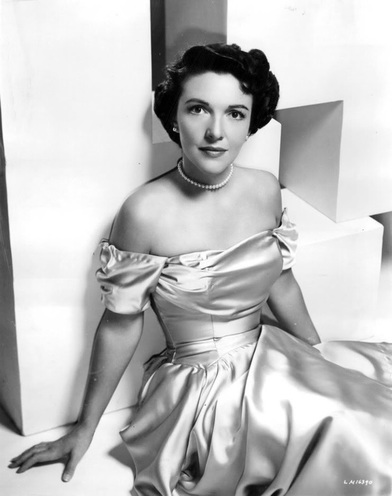 In 1940, a young Davis had appeared as a National Foundation for Infantile Paralysis volunteer in a memorable short subject shown in movie theaters to raise donations for the crusade against polio. The Crippler featured a sinister figure spreading over playgrounds and farms, laughing over its victims, until finally dispelled by the volunteer. It was very effective in raising contributions.

Following her graduation from college, Davis held jobs in Chicago as a sales clerk in Marshall Field's department store and as a nurse's aide. With the help of her mother's colleagues in theatre, including ZaSu Pitts, Walter Huston, and Spencer Tracy, she pursued a career as a professional actress. She first gained a part in Pitts' 1945 road tour of Ramshackle Inn, moving to New York City. She landed the role of Si-Tchun, a lady-in-waiting, in the 1946 Broadway musical about the Orient, Lute Song, starring Mary Martin and a pre-stardom Yul Brynner. The show's producer told her, "You look like you could be Chinese."

After passing a screen test, she moved to California and signed a seven-year contract with Metro-Goldwyn-Mayer Studios Inc. (MGM) in 1949; she later remarked, "Joining Metro was like walking into a dream world." Her combination of attractive appearance—centered on her large eyes—and somewhat distant and understated manner made her hard at first for MGM to cast and publicize. Davis appeared in eleven feature films, usually typecast as a "loyal housewife",[27] "responsible young mother", or "the steady woman". Jane Powell, Debbie Reynolds, Leslie Caron, and Janet Leigh were among the actresses with whom she competed for roles at MGM.

Davis' film career began with small supporting roles in two films released in 1949, The Doctor and the Girl with Glenn Ford and East Side, West Side starring Barbara Stanwyck. She played a child psychiatrist in the film noir Shadow on the Wall (1950) with Ann Sothern and Zachary Scott; her performance was called "beautiful and convincing" by New York Times critic A. H. Weiler. She co-starred in 1950's The Next Voice You Hear..., playing a pregnant housewife who hears the voice of God from her radio. Influential reviewer Bosley Crowther of The New York Times wrote that "Nancy Davis is delightful as a gentle, plain, and understanding wife."In 1951, Davis appeared in Night into Morning, her favorite screen role, a study of bereavement starring Ray Milland.

Crowther said that Davis "does nicely as the fiancée who is widowed herself and knows the loneliness of grief," while another noted critic, The Washington Post's Richard L. Coe, said Davis "is splendid as the understanding widow." MGM released Davis from her contract in 1952; she sought a broader range of parts, but also married Reagan, keeping her professional name as Davis, and had her first child that year. She soon starred in the science fiction film Donovan's Brain (1953); Crowther said that Davis, playing the role of a possessed scientist's "sadly baffled wife," "walked through it all in stark confusion" in an "utterly silly" film. In her next-to-last movie, Hellcats of the Navy (1957), she played nurse Lieutenant Helen Blair, and appeared in a film for the only time with her husband, playing what one critic called "a housewife who came along for the ride." Another reviewer, however, stated that Davis plays her part satisfactorily, and "does well with what she has to work with."

Author Garry Wills believes that Davis was underrated as an actress overall because her constrained part in Hellcats was her most widely seen performance. In addition, Davis downplayed her Hollywood goals: promotional material from MGM in 1949 said that her "greatest ambition" was to have a "successful happy marriage"; decades later, in 1975, she would say, "I was never really a career woman but [became one] only because I hadn't found the man I wanted to marry. I couldn't sit around and do nothing, so I became an actress." Ronald Reagan biographer Lou Cannon nevertheless characterized her as a "reliable" and "solid" performer who held her own in performances with better-known actors. After her final film, Crash Landing (1958), Davis appeared for a brief time as a guest star in television dramas, such as the Zane Grey Theatre episode "The Long Shadow" (1961), where she played opposite Ronald Reagan, as well as Wagon Train and The Tall Man, until she retired as an actress in 1962.

During her career, Davis served on the board of directors of the Screen Actors Guild for nearly ten years. Decades later, Albert Brooks attempted to coax her out of acting retirement by offering her the title role opposite himself in his 1996 film Mother. She declined in order to care for her husband, and Debbie Reynolds played the part.