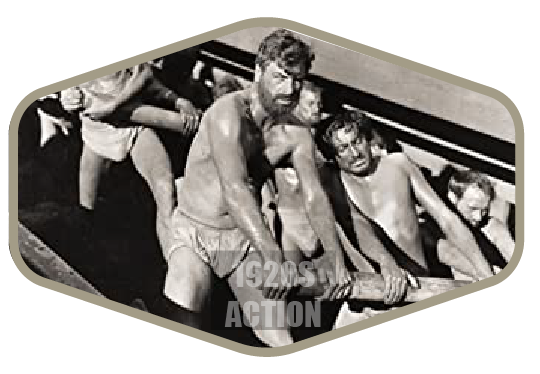 The 1920s was the decade that bore witness to the end of WWI, the Stock Market Crash, and the resulting Depression. Adventure escapism fare for moviegoers included swashbucklers, lavish, historical epics, and Westerns.

In this era, no other actor better defined this genre than Douglas Fairbanks. He was one of the silver screen's most prolific action heroes, setting the standard for his predecessors for decades to come. His swashbuckling exploits, athleticism, and natural charisma earned him the moniker, “The King of Hollywood”.

ACTION & ADVENTURE FILMS OF THE 1920s 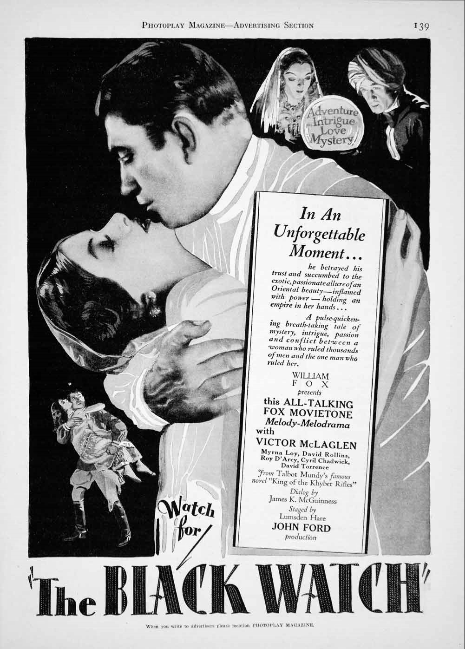 BLACK WATCH, THE   (1929)
(91 Min.) Genre: 1920 ACTION, Transfer Quality: B
In this early talkie from director John Ford, a Scottish captain and his regiment are sent to India during WW I and assigned to quell a native uprising in the Northern mountains. Unfortunately, soon after arriving, he gets drunk and seemingly kills another officer during a barroom fight. He escapes capture and disappears into the crowd. Now wanted as a renegade, he involves himself with a beautiful but sadistic native princess, a direct descendant of Alexander the Great. He cozies up to her and learns that she is planning to send her troops to attack the British through Khyber pass. Though she correctly suspects that the fugitive soldier is really a spy, she cannot help but fall in love with him, thereby sparing him the usual torture and castration she forces upon other captured British soldiers. Unfortunately her love causes her downfall in the exciting conclusion.
Starring: Victor McLaglen, Myrna Loy, David Rollins, Lumsden Hare, Roy D'Arcy, John Wayne, Randolph Scott | Directed by: John Ford
Read More 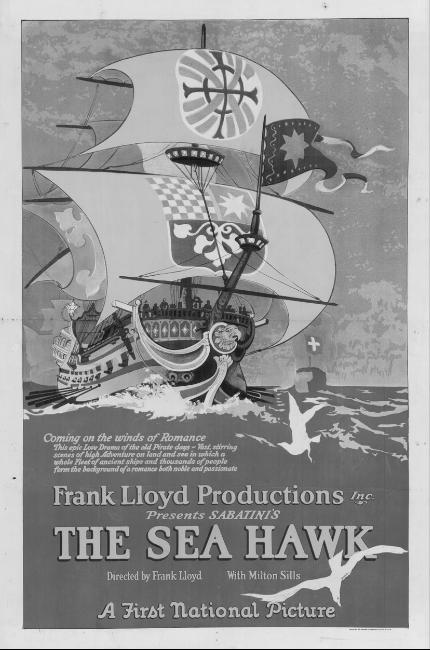 SEAHAWK, THE   (1924)
(124 Min.) Genre: 1920 ACTION, Transfer Quality: B
This 12-reel silent adaptation of The Sea Hawk is far more faithful to the Rafael Sabatini original than the 1940 Errol Flynn version. Milton Sills stars as Sir Oliver Tressilien, a wealthy English baronet who is framed for the murder of his fiancée's brother. The instigator of this outrage is Sir Tressilien's covetous half brother, who also arranges for Tressilien to be shanghaied and carried off to sea. When his ship is attacked by Spaniards, Tressilien is put to work as a galley slave. Escaping, he becomes the leader of a gang of Moorish pirates. Despite his now-fearsome reputation, Tressilien is able to win back the love of his fiancée, Lady Rosamund Godolphin (Enid Bennett), who has been compelled to marry his half brother. A thrilling climactic duel to the death brings this sure-fire audience pleaser to a rousing conclusion. The Sea Hawk may well be the best film ever made by the popular Milton Sills.
Starring: Milton Sills, Enid Bennett, Lloyd Hughes, Wallace MacDonald | Directed by: Frank Lloyd
Read More
Explore the simpler time of yesteryear...
A time when men and women were truly glamorous. A time when you could watch any movie with your children and not have to worry about gratuitous sex or violence – yet enjoy all the lustful inferences and edge-of-your-seat suspense.
Welcome to The Timeless Theater!