During the filming of The Young Philadelphians (1959) starring Paul Newman, she fell during a horse-riding sequence and broke her back. | Had her own nightclub act in the 1970s, which she took to Los Angeles and Canada. | Signed by Warner Brothers after being seen in a college drama production, she was subsequently billed as "The Dynamite Girl" and "The Flame Girl" in promotional articles. | Lifelong friend of Frances Rafferty. They met as dance students when they were kids. | In her final years she and husband Craig Stevens lived in the West Hollywood house formerly owned by Loretta Young. The living room still had the big white doors that Young had used for her entrances on her TV series. | A star of Hollywood's Golden Age, neither she nor husband Craig Stevens were ever awarded a "star" on the Hollywood Walk of Fame. | Dirk Bogarde referred to her as "Fun, professional, loyal, and courageous" and "The days are brighter for knowing her.". | Smith lost the leading role in the Hollywood High School production of "Who Killed Cock Robin?" to schoolmate Nanette Fabray, who was a year older. | Even after becoming an American citizen, she remained completely apolitical and never registered to vote. | Smith appeared on the cover of the May 3, 1971 issue of Time as the result of the critical acclaim for her singing and dancing role in Hal Prince's Broadway production of Stephen Sondheim's Follies, which marked her long-awaited Broadway debut. In 1972, she won the Tony Award for Best Actress in a Musical for her performance. 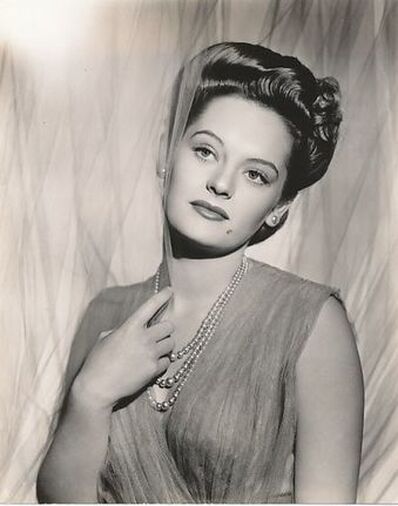 Statuesque, smart Canadian-born Alexis Smith, with her blue/green eyes and a seductively husky voice, lent a touch of class to her leading ladies of the 1940s and 1950s.

After her family moved to California, Alexis grew into a precocious talent, performing ballet in public by the age of thirteen, dancing to 'Carmen' at the Hollywood Bowl. She later graduated with a degree in drama from Los Angeles City College, having previously won an acting contest whilst still in high school. During a performance of a play on campus, she was spotted by a Warner Brothers talent scout and signed to a contract in 1941.

Until the early 1950s she was paired with the top male stars in Hollywood, including Clark Gable, Humphrey Bogart, William Holden and Bing Crosby. While often simply decorative (as, for example, in Of Human Bondage (1946) and Stallion Road (1947)), stylishly attired by costume designers like Milo Anderson and Helen Rose in the most glamorous gowns, Alexis also proved to be a capable and spirited actress, in spite of relatively few opportunities to break out of the mold of "the other woman".

At the beginning of her career the studio's publicity department touted Alexis, much to her chagrin, as the "Dynamite Girl". While she claimed in later years to have typecast herself, and that few of her assigned roles ever challenged her on any level, Alexis frequently enjoyed good critical reviews for many of her performances (she was also popular with directors and film crews, who appreciated her relaxed, professional manner on the set). To begin with, she was cast in two films with Errol Flynn (she would make a total of four films with him): Dive Bomber (1941) and the boxing drama Gentleman Jim (1942).

Though decidedly second fiddle to both the action and the charismatic Flynn, Alexis made a good first impression as the fetching romantic interest. Her next performance, in The Constant Nymph (1943) opposite Charles Boyer, was described by a reviewer as an "intelligent rendition". Her biggest hit of the mid-1940s was as Cole Porter's wife in the inaccurate--but hugely successful--biopic Night and Day (1946). She also appeared in two "noir" films with Humphrey Bogart at his most menacing: the interesting and underrated Conflict (1945) and the excellent The Two Mrs. Carrolls (1947).

As Clark Gable's wife in the gambling drama Any Number Can Play (1949), she was critically lauded as "genuinely appealing". In between there were also some conspicuous failures, in particular her somewhat stolid performance in the period drama The Woman in White (1948). She had little to do in Here Comes the Groom (1951) and The Turning Point (1952) and her best part in the 1950s, though small, was that of Carol Wharton in The Young Philadelphians (1959).

During the 1960s Alexis took a sabbatical from the screen to appear on stage with her husband, actor Craig Stevens (her marriage, a rare Hollywood success, lasted 49 years) in "Critic's Choice", "Cactus Flower" and "Mary, Mary". She reserved her best acting for the stage, becoming the Tony Award-winning star of Stephen Sondheim's musical "Follies", in which she played Phyllis during the 1971 run on Broadway (which landed her on the cover of the May 3 issue of 'Time' Magazine) and at the Shubert Theatre in Los Angeles in 1972. In 1973 she played Sylvia Fowler in a revival of Clare Boothe Luce's "The Women" and was nominated for another Tony for her leading role of Lila Halliday in "Platinum" in 1979.

On television Alexis was seen infrequently from the mid-'50s, sometimes appearing on the same show opposite her husband. She had a recurring role as the homicidal Lady Jessica Montfort in Dallas (1978) during the 1984 and 1990 seasons, and was nominated for an Emmy for a guest-starring role on Cheers (1982). It was fitting, or perhaps ironic, that her last film role, in The Age of Innocence (1993), was as a New York socialite, a type of character she had portrayed frequently in her heyday at Warners.
- IMDb Mini Biography By: I.S.Mowis

“When a person is judged, his or her accomplishments should be considered first. The performance of a person’s life must be focused upon. The chronological is of minor consequence. Years are like dollar signs. They indicate a preoccupation with numbers. People are not numbers.”

“When they tell me one of my old movies is on TV, I don’t look at it.”