Was a speed-rated pilot and at one time flew her own plane, a 250 Comanche, winning several tournament awards. | Made three other pictures with her Detour (1945) co-star Tom Neal. They had a rather chilly working relationship. | In 1992 the Library of Congress named Detour (1945) as the first film noir and "B- movie" inducted into the National Registry of Film. | In May of 2007 Time Magazinew called her walking nightmare portrayal of Vera in Detour (1945) one of the Top "10 All-Time Best Villains", included alongside James Cagney in White Heat (1949) Robert Mitchum in Cape Fear (1962) and Arnold Schwarzenegger in The Terminator (1984). | Warner Bros. briefly considered John Garfield to play the lead opposite Ann in Detour (1945). Tom Neal was cast when Poverty Row studio Producers Releasing Corp. (PRC) bought the script by Martin Goldsmith. | A beauty icon of the 1940s, she was photographed for Esquire magazine | Her marriage to agent Bert D'Armand lasted from 1943 until his death in 1969. Earlier in her life, she had been married for two years to a man named Clark Tennesen 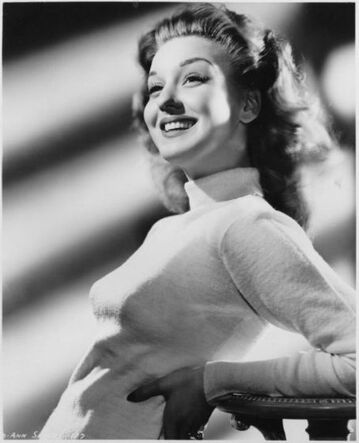 For one tough cookie who achieved major cult stardom with her hard-bitten blonde looks and “Perfect Vixen” tag, Ann Savage in real life was a lovely, spirited, gentle-looking lady. She may have peaked only briefly in 1940s Hollywood low-budgeters, but she made the most of it during that fairly short tenure. Out of the dozens of movies under her belt, one film part shot her to femme fatale infamy and, to this day, remains her biggest claim to fame. It took only four (some accounts say six) days to shoot, but Detour (1945) stands out as one of the best examples of surreal film noir, and the unforgettable dialogue and riveting teaming of Ann and sulky co-star Tom Neal are the primary reasons for its enduring fame.

Former model Ann Savage signed her first film contract at Columbia, where she reportedly spent much of her time keeping lascivious studio head Harry Cohn at arm’s length. It was always a bit off-putting to watch Savage play standard distressed damsels in films like After Midnight With Boston Blackie (1946); her true forte was portraying hard-boiled babes who spelled trouble. Savage’s most famous screen portrayal, that of a blackmailing hitchhiker who comes to a sudden and unexpected bad end, can be found in what was probably her cheapest picture: the 1946 cult favorite Detour. Quitting films cold in 1953, Ann Savage made a screen comeback in 1986, playing a nun in Fire with Fire.

Elsewhere the veteran actress continued to delight her fans with her appearances at “film noir” festivals, nostalgia conventions and special screenings of her work. Refusing to appear in exploitive material, Ann turned down much work. In later years she appeared very sporadically--in the movie Fire with Fire (1986) and an episode of Saved by the Bell (1989). Out of nowhere the resilient octogenarian was cast by Canadian director Guy Maddin, a film noir fan, to play a shrewish mother in the highly acclaimed My Winnipeg (2007), earning “bad girl” raves all over again.

Named an “icon and legend” by the Academy of Motion Picture Arts and Sciences in 2005, Ann was applauded for her body of work by “Time” Magazine twice in 2007. She died at a Hollywood nursing home at age 87 on Christmas Day in 2008 following multiple stroke complications..


"No one would wish to be remembered for things like Two-Man Submarine (1944) or Saddles and Sagebrush (1943), which were typical of the kind of pictures I did. The part in Detour (1945) seemed like the opportunity every actress longs for. When I first read the script by Martin Goldsmith, I knew that I was going to be part of something very exciting."

[about director William Berke, with whom she made several pictures] ["He had] a round face, but wasn't fat--nor was he too thin. A gentle man who spoke quietly. A nice, lovely man who wore glasses--he wasn't tall or short, probably around 5'8" or 5'9". Nicely built and a nice face."

[on Tom Neal, her co-star in Detour (1945) and several previous films] "He was a troublemaker, the only one I had problems with in all the years I was in movies. He would go out of his way to rub you the wrong way! Otherwise, he could be charming. He was like two different people. He wore lifts, otherwise I'd be taller than he was; and those hairstyles made me seem taller, anyway. I was 5'4¾" tall and Tom was about the same, as was Don 'Red' Barry, for that matter. Tom embarrassed me once. He had some buddies with him. I was standing there as they were lighting me for the next scene. He came into the scene, saying he had something to tell me. I leaned over and he stuck his tongue in my ear. I hit him as hard as I could! I slapped him with my hand open! I was a tough little kid and could take care of myself. I was so angry and humiliated I naturally reacted by hitting him. He staggered back, and I immediately left the set, so I didn't see his reaction, be it anger or whatever. Later, when we worked together, there was no talk at all----just did our scenes together and that was it. We stayed apart and never spoke."