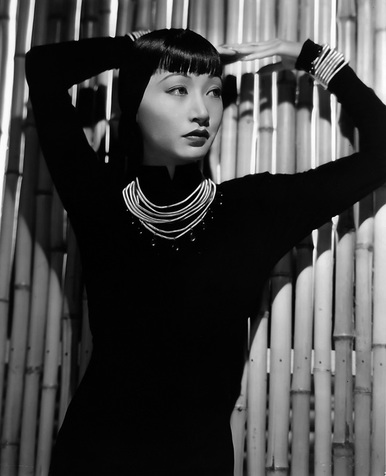 Born and educated in Los Angeles, Anna May Wong began playing small parts in her preteen years. Her first role of consequence was as a slave girl in Douglas Fairbanks’ lavish The Thief of Baghdad (1924); shortly afterward, she played Tiger Lily in the first film version of Peter Pan (1924). While she had several large roles in subsequent Hollywood films, it wasn’t until Wong went to Europe in 1929 that she was taken seriously as an actress. Once back in Hollywood, however, it was back to exotic oriental stereotypes, with little opportunity for romantic roles, as there were still many taboos against racial intermingling in films of the 1930s. Her best film assignments included Josef von Sternberg’s Shanghai Express (1932), the Sherlock Holmes opus A Study in Scarlet (1933), and a string of Paramount second features in the late-’30s, notably Dangerous to Know (1937) and Daughter of Shanghai (1937). Wong retired from films in 1942, thereafter making occasional stage appearances in the Los Angeles area. Anna May Wong died of heart failure at the age of 56, just before she was to begin work on the screen version of the Rodgers and Hammerstein Broadway hit Flower Drum Song.

The 170-cm-tall (5’7”, although other sources cite her height as 5’4½”) beauty was known as the world’s best-dressed woman and widely considered to have the loveliest hands in the cinema. Her big breakthrough after her auspicious start with “The Toll of the Sea” finally came when Douglas Fairbanks cast her in a supporting role as a treacherous Mongol slave in his Middle Eastern/Arabian Nights extravaganza The Thief of Bagdad (1924). The $2-million blockbuster production made her known to critics and the movie-going public. For better or worse, a star, albeit of the stereotypical “Dragon Lady” type, was born.

Despite her waxing fame, she was limited to supporting roles, as Caucasian actresses, including most improbably Myrna Loy, continued to be cast as Asian women in lead roles from the 1920s through the 1940s, despite the ready availability of Anna May Wong. She was unable to attract lead parts despite her beauty and proven acting talent, even in films featuring Asian women, but she did carve out a career as a supporting player in everything from A-list movies to two-reel comedies and serials.

Available Films:
Trivia:
It is believed by some that Wong never kissed her leading man on the lips on screen but she does share just such a kiss with John Loder in Java Head (1934). Such a scene was filmed for her 1929 film “The Road to Dishonour” with John Longden but was cut by censors who felt that moviegoers might be offended by an interracial kiss. Also, in “Lady from Chungking” (1942), Harold Huber, a caucasian, playing a Japanese General, kisses her, on the lips, as the scene fades, in the 63rd minute of the film.