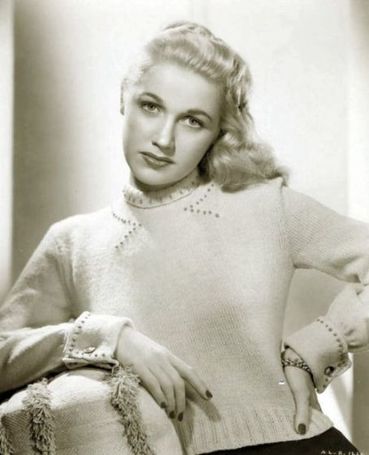 Audrey Long, who starred opposite John Wayne in the 1944 Western Tall in the Saddle and in a pair of film noir favorites directed by Anthony Mann and Robert Wise three years later, has died. She was 92.

Long, who was married to Leslie Charteris, the author of The Saint adventure books, from 1952 until his death in 1993, died Sept. 19 in Virginia Water, Surrey, England, after a long illness, according to Ian Dickerson of the website LeslieCharteris.com.

With her husband (played by Steve Brodie), Long’s character fled from the cops and a crook (Raymond Burr) in Mann’s 1947 crime thriller Desperate. Also in May of that year, she was seen in theaters as the rich San Francisco sister of Claire Trevor who is fooled into marrying the evil and duplicitous character played by Lawrence Tierney in Born to Kill, directed by Wise.

The hazel-eyed Long also appeared in Yankee Doodle Dandy (1942), Billy Wilder’s The Lost Weekend (1944), Wise’s A Game of Death (1945), Pan-Americana (1945), Perilous Holiday (1946), The Adventures of Gallant Bess (1948), Song of My Heart (1948), Post Office Investigator (1949), Insurance Investigator (1951) and Indian Uprising (1952) before she retired from acting.Long was a native of Orlando; her father, a U.S. Navy chaplain, moved his family around the country. Eventually, she graduated from high school in Los Gatos, Calif., and received a scholarship to Max Reinhardt’s drama school in Hollywood. While still a teenager, she was signed by Warner Bros. and made her screen debut in an uncredited role in The Male Animal (1942), starring Henry Fonda and Olivia de Havilland.She had a small role on Broadway in 1943 opposite Stella Adler and Gregory Peck in Sons and Soldiers and then signed a movie contract with RKO, for which she appeared in A Night of Adventure (1944) alongside Tom Conway, who would later play Simon Templar — aka The Saint — on an NBC Radio series.Roger Moore famously starred as the sophisticated “modern-day Robin Hood” in an ITV series in the 1960s; George Sanders (Conway’s brother) played the Saint in several movies in the 1930s and ’40s; and Val Kilmer portrayed Templar in a 1997 film directed by Phillip Noyce.

Trivia:
She studied at the Max Reinhardt Drama School in Hollywood on a scholarship, and, upon graduation, was signed by Warner Brothers. She also worked as a Power's Model. In 1943, she went on a nationwide drive selling War Bonds. From 1944, she had leading roles in B-movies at RKO, Monogram, Republic and Columbia, leaving films in 1952.