Often portrayed jilted lovers, bad girls, unfaithful wives, and women with a past. | Was supposed to play the female lead in the film noir classic The Killers (1946) with Burt Lancaster but filming Lady in the Lake (1946) became too long and involved so she couldn't do the part. Instead MGM took a chance on Ava Gardner in the role and, of course, she became a star. | During her bachelorette days she was courted by such actors as Brian Donlevy, Ted North, Lew Ayres, Robert Walker, David Niven, and Cary Grant. | Director George Stevens originally sought Totter for the role of Alice Tripp for his film A Place in the Sun (1951) but MGM refused to loan her out. The part was later secured by Shelley Winters. | Following her high school graduation, she worked as a radio actress in New York City, New York, and Chicago, Illinois, prior to her moving to Hollywood, California during the middle of World War II to establish herself in motion pictures. | She was given advice at MGM by Lionel Barrymore, "You're one of the best actresses I've ever seen, but you're never going to be a star. You're too versatile. If you want to be a star, start projecting your own personality.". | Appeared with Robert Montgomery in two movies, Lady in the Lake (1946) and The Saxon Charm (1948). 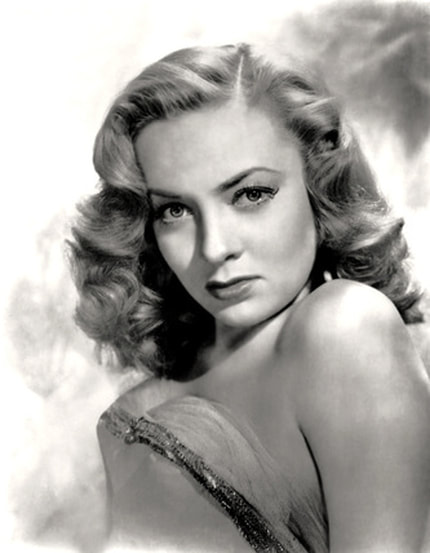 Active - 1944 - 1987  |   Born - Dec 20, 1917 in Joliet, IL  |   Died - Dec 12, 2013 in West Hills, CA  |   Genres - Drama, Crime, Mystery, Action, Western  | Height: 5’ 6”
​
One is certainly hard-pressed to think of another true "bad girl" representative so closely identifiable with film noir than hard-looking blonde actress Audrey Totter. While she remained a "B"-tier actress for most her career, she was an "A" quality actress and one of filmdom's most intriguing ladies. She always managed to set herself apart even in the most standard of programming.

Born to an Austrian father and Swedish mother on December 20, 1917, in Joliet, Illinois, she treaded lightly on stage ("The Copperhead," "My Sister Eileen") and initially earned notice on the Chicago and New York radio airwaves in the late 1930s before "going Hollywood." MGM developed an interest in her and put her on its payroll in 1944. Still appearing on radio (including the sitcom "Meet Millie"), she made her film bow as, of course, a "bad girl" in Main Street After Dark (1945).

That same year the studio usurped her vocal talents to torment poor Phyllis Thaxter in Bewitched (1945). Her voice was prominent again as an unseen phone operator in Ziegfeld Follies (1945). Audrey played one of her rare pure-heart roles in The Cockeyed Miracle (1946). At this point she began to establish herself in the exciting "film noir" market.

Among the certified classics she participated in were The Postman Always Rings Twice (1946) in which she had a small role as John Garfield's blonde floozie pick-up. Things brightened up considerably with Lady in the Lake (1946) co-starring Robert Montgomery as detective Philip Marlowe. The film was not well received and is now better remembered for its interesting subjective camera technique.

Audrey's first hit as a femme fatale co-star came on loanout to Warner Bros. In The Unsuspected (1947), she cemented her dubious reputation in "B" noir as a trampy, gold-digging niece married to alcoholic Hurd Hatfield. She then went on a truly enviable roll with High Wall (1947), as a psychiatrist to patient Robert Taylor, The Saxon Charm (1948) with Montgomery (again) and Susan Hayward, Alias Nick Beal (1949) as a loosely-moraled "Girl Friday" to Ray Milland, the boxing film The Set-Up (1949) as the beleaguered wife of washed-up boxer Robert Ryan, Any Number Can Play (1949) with Clark Gable and as a two-timing spouse in Tension (1949) with Richard Basehart.

Although the studio groomed Audrey to become a top star, it was not to be. Perhaps because she was too good at being bad. The 1950s film scene softened considerably and MGM began focusing on family-styled comedy and drama. Audrey's tough-talking dames were no longer a commodity and MGM soon dropped her in 1951. She signed for a time with Columbia Pictures and 20th Century Fox as well but her era had come and gone. Film offers began to evaporate. At around this time she married Leo Fred, a doctor, and instead began focusing on marriage and family.

TV gave her career a slight boost in the 1960s and 1970s, including regular roles in Cimarron City (1958) and Our Man Higgins (1962) as a suburban mom opposite Stanley Holloway's British butler. After a period of semi-retirement, she came back to TV to replace Jayne Meadows in the popular television series Medical Center (1969) starring Chad Everett and James Daly. She played Nurse Wilcox, a recurring role, for four seasons (1972-1976). The 70-year-old Totter retired after a 1987 guest role on "Murder, She Wrote." Her husband died in 1996. On December 12, 2013, Audrey Totter died at age 95 in West Hills, California.

"When today's stars curse, you don't even hear them, but when Clark Gable said 'damn,' you gasped."

"I liked Louis B. Mayer - I thought he was a nice man. Of course, he was the best actor at MGM, especially if somebody asked him for more money, and he'd cry! 'I'm selling glamor,' Mayer would say. All his MGM women were pure and wonderful. When they took pictures, you never had a cigarette in your hand or a glass of alcohol; and when you did a scene, your hair was never mussed - you were always beautiful. Warner Bros. films, for example, were more realistic, but Mayer said, "I'm selling illusion.'"

“I thought everything would be orderly and peaceful. The first year I was here [in Hollywood] I set a record of appearing in eight pictures.”