In 1995 she was chosen by Empire magazine as one of the 100 Sexiest Stars in film history (#68) | Her singing voice in Show Boat (1951) was dubbed by Annette Warren, although her voice is left in on the soundtrack album. | Her early education was sketchy; by 1945 she had read two books, the Bible and "Gone with the Wind." In later life she more than made up for this lack by continual self-education. | She sang in her own voice for The Killers (1946) but in all MGM films her singing voice was dubbed (much to her disgust). | She spent her final years as a recluse in her London apartment--her only companions were her longtime housekeeper Carmen Vargas and her beloved Welsh Corgi, Morgan. Two strokes in 1986 left her partially paralyzed and bedridden. Although she could easily afford her medical expenses, Frank Sinatra wanted to pay for her to visit a specialist in the US, and she allowed him to make the arrangements for a medically-staffed private plane. Her last words (to her housekeeper Carmen) were, "I'm so tired", before she died of pneumonia at age 67. Vargas took her body home to her native North Carolina for private burial. None of her ex-husbands attended. | A statue of her from The Barefoot Contessa (1954) was given to Frank Sinatra as a gift. He kept it in his backyard garden well after their divorce. When he married Barbara Marx, she forced him to get rid of it. | During the first two years of her marriage to Frank Sinatra, he was at the lowest point of his career. She often had to loan him money so he could buy presents for his children. He went broke in 1951, and she had to pay for plane tickets for him so that he could go with her to Africa, where she was shooting Mogambo (1953). This all changed after he won the Best Supporting Actor Oscar for his performance in From Here to Eternity (1953). | Frank Sinatra bought her a puppy for her birthday during their courtship, a Corgi she named Rags. For the rest of her life she always had a Corgi with her. After Rags died, she had Cara and then Morgan. | In Charlton Heston's autobiography "In the Arena" he revealed that she behaved badly during the troubled shoot of 55 Days at Peking (1963). For example, she stopped the filming when a Chinese extra took her picture without permission. Heston also stated that her character was killed off to keep the producers and director from having to deal with her anymore. | She sought the role of Mrs. Robinson in The Graduate (1967), and reportedly called Mike Nichols saying,"I want to see you! I want to talk about this 'Graduate' thing!" Nichols did not seriously consider her for the role, but did end up visiting her hotel. He later recounted that "she sat at a little French desk with a telephone, she went through every movie star cliché. She said, 'All right, let's talk about your movie. First of all, I strip for nobody'". | Yvonne De Carlo once said of her, "She's one of the few women in Hollywood that I like". 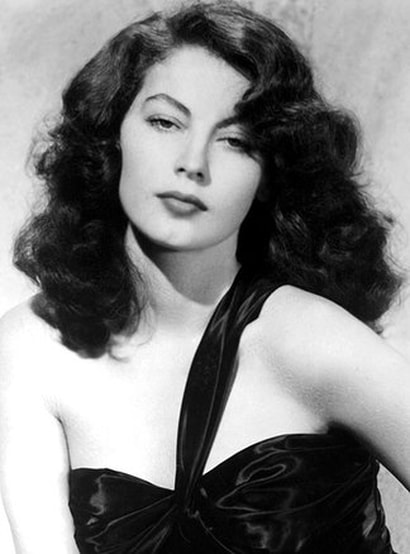 Active - 1941 - 1990  |   Born - Dec 24, 1922 in Brogden, North Carolina, United States  |   Died - Jan 25, 1990 in London, England, UK  |   Genres - Drama, Romance, Comedy, Action, Adventure  | Height: 5’ 6”
​
Ava Lavina Gardner was born on December 24, 1922 in Grabtown, North Carolina, to Mary Elizabeth (née Baker) and Jonas Bailey Gardner. Born on a tobacco farm, where she got her lifelong love of earthy language and going barefoot, Ava grew up in the rural South. At age 18, her picture in the window of her brother-in- law's New York photo studio brought her to the attention of MGM, leading quickly to Hollywood and a film contract based strictly on her beauty.

With zero acting experience, her first 17 film roles, 1942-1945, were one-line bits or little better. After her first starring role in B-grade Whistle Stop (1946), MGM loaned her to Universal for her first outstanding film The Killers (1946). Few of her best films were made at MGM which, keeping her under contract for 17 years, used her popularity to sell many mediocre films. Perhaps as a result, she never believed in her own acting ability, but her latent talent shone brightly when brought out by a superior director, as with John Ford in Mogambo (1953) and George Cukor in Bhowani Junction (1956).

After three failed marriages, dissatisfaction with Hollywood life prompted Ava to move to Spain in 1955; most of her subsequent films were made abroad. By this time, stardom had made the country girl a cosmopolitan, but she never overcame a deep insecurity about acting and life in the spotlight. Her last quality starring film role was in The Night of the Iguana (1964), her later work being (as she said) strictly "for the loot".

In 1968, tax trouble in Spain prompted a move to London, where she spent her last 22 years in reasonable comfort. Her film career did not bring her great fulfillment, but her looks may have made it inevitable; many fans still consider her the most beautiful actress in Hollywood history. Ava Gardner died at age 67 of bronchial pneumonia on January 25, 1990 in Westminister, London, England.

"I haven't taken an overdose of sleeping pills and called my agent. I haven't been in jail, and I don't go running to the psychiatrist every two minutes. That's something of an accomplishment these days."

"Maybe I just didn't have the temperament for stardom. I'll never forget seeing Bette Davis at the Hilton in Madrid. I went up to her and said, "Miss Davis, I'm Ava Gardner and I'm a great fan of yours." And do you know, she behaved exactly as I wanted her to behave. "Of course you are, my dear," she said. "Of course you are." And she swept on. Now that's a star."

"[on Robert Taylor] I knew him as a warm, generous, intelligent human being. Our love affair lasted three, maybe four months. A magical little interlude. I've never forgotten those few hidden months. I think Bob, despite all his efforts, couldn't break the mold of the beautiful lover. The film world remembers him that way, and I have to say that I do, too."

We're in the process of identifying which of our films are in the Public Domain, and offering these for sale on DVD.
​Please stay Tuned...!
Check out our new Film Noir Collection:
Coffee Mugs!
Phone Cases!
iPad Cases!
More coming soon!