Jessica Lange read Payton's autobiography "I Am Not Ashamed" while filming The Postman Always Rings Twice (1981), figuring that the character of hard luck roadhouse waitress Cora perhaps drifted to Hollywood to become an actress. Coincidentally, both Lange and Payton were born in Cloquet, MN, and Payton starred in a stage version of "The Postman Always Rings Twice" in 1953. | Eloped with and married her high school sweetheart, William Hodge. Her parents had the marriage annulled quickly. | In 1964 she was arrested for shoplifting an outfit of clothing. | In 1965 she was arrested and charged with possession of heroin and a hypodermic syringe. The charges were dismissed, due to "insufficient evidence.". | Her autobiography, "I Am Not Ashamed", was actually ghostwritten by someone else. According to her ghostwriter, Leo Guild, Barbara had one favor to ask. She didn't want to be paid in cash or check. She wanted payment in red wine because there were claims on her cash. | When Franchot Tone decided to divorce her, he had a private detective take pictures of her having sex with other men. He then sent the photos to all the major Hollywood studios, hoping they would ruin her career. | The film industry finally shut her out when she began flaunting the interracial relationship she was involved in, with black actor Woody Strode. | Dated or was romantically linked to actor Mickey Knox, producer Howard Hughes, actor John Ireland, gangster Mickey Cohen, actor George Raft, entertainment attorney Greg Bautzer, actors Gregory Peck, Tom Conway, Woody Strode, Guy Madison, Gary Cooper, Steve Cochran, and Jerry Bialac. | She had a six-month affair with Bob Hope in 1949 in which he paid for her to live in a luxurious apartment. The affair ended when she began making demands for more money. 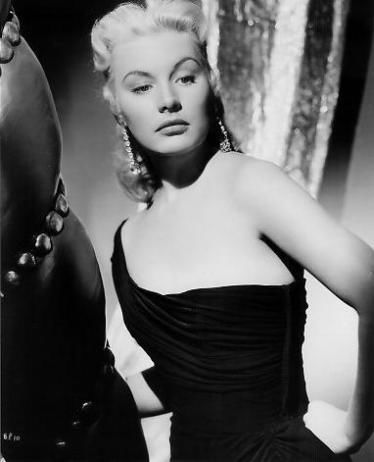 Things started out well enough for Barbara Lee Redfield, born on November 26, 1927, in Cloquet, Minnesota. From a modest, blue-collar background, she grew up to be a drop-dead gorgeous young woman and, following a quickie marriage at age 19, decided to leave home for good to try to capitalize on her good looks in Tinseltown. She headed for Hollywood in 1948 and, within a short time, was placed under contract by Universal, where she began the typical starlet route of bit parts.

She reached her peak with routine but promising co-star work opposite James Cagney in Kiss Tomorrow Goodbye (1950), Gary Cooper in Dallas (1950) and Gregory Peck in Only the Valiant (1951). Although her talent  was overshadowed by her brassiness  and looks, her slightly lurid appeal seemed to be enough to carry her through. Caught up in the glitz and glamor, however, her career started taking second place to a reckless life full of capricious romances involving a number of top stars and producers, many of them married. One of her more famous trysts ended up making headlines for her, and none of them favorable.

She was juggling two boyfriends at the same time, classy "A" actor Franchot Tone and muscular "B" actor Tom Neal, and they fought almost to the death for Barbara's affections. On September 13, 1951, the men engaged in a deadly brawl and when it was over, Tone was in the hospital with broken bones and a brain concussion. Barbara ended up with both a black eye and a tarnished reputation. She married Tone after he recovered, but left him after only seven weeks and returned to the violence-prone Neal. That abusive relationship lasted four years, though they never married. During that time Barbara's career had plummeted to the point where she was making such dismal features as Bride of the Gorilla (1951).

She went to England to try to rejuvenate her career, but no dice; it was over and her life was skidding out of control. Her once beautiful face now blotchy and her once spectacular figure now bloated, Barbara sank deeper into the bottle. From 1955 to 1963 there were various brushes with the law - among them passing bad checks, public drunkenness and, ultimately, prostitution. She was forced to sleep on bus benches, was beaten and bruised by her tricks, and lost teeth in the process.

In 1967, after failed efforts to curb her drinking, she finally moved in with her parents in San Diego to try to dry out. It was too late. On May 8, 1967, the 39-year-old former starlet was found on the bathroom floor - dead of heart and liver failure. Somehow through all this misery she managed a tell-all book ironically entitled "I Am Not Ashamed" (1963).


[poem] "Love is a memory. Time cannot kill the cherished tune, gay and absurd, and the music unheard."

"He [Franchot Tone] couldn't accept me as Barbara Payton from the day of our marriage. If he could have we might have been happy. But I was the Barbara Payton of Tom Neal's--of my lover's--of my past--all of it. He hated me for what I had been and loved me for what I was. He tortured himself. I was only somebody for his doubts, fears, recriminations to bounce off. I resolved to let himself spend himself of the torture. It was endless. It built and there was no end in sight. Every part of my body reminded him of another man . . . It couldn't work. I agreed to give him a divorce by default. After days of wrangling and reconciliations our attorneys agreed on a settlement."