Attended and graduated from the University of California, Santa Barbara (1948). | Is mentioned in the movie Shampoo (1975), when hairdresser Warren Beatty says "I do Barbara Rush's hair". | Was separated from second husband Warren Cowan in 1969 at the time she learned of first husband Jeffrey Hunter's sudden death following brain surgery after falling down a flight of stairs. | Along with Leonard Nimoy, David McCallum, Cliff Robertson and Peter Breck, she is one of only five actors to appear in both The Outer Limits (1963) and The Outer Limits (1995) and the only woman to do so. She played Leonora Edmond in The Outer Limits: The Forms of Things Unknown (1964) and Barbara Matheson in The Outer Limits: The Balance of Nature (1998). | She is one of five actors to have played "Special Guest Villains" on Batman (1966) who are still alive, the others being Julie Newmar, John Astin, Joan Collins and Glynis Johns. | Appears in No Down Payment (1957) with ex-husband Jeffrey Hunter, they both portraying married characters, but not married to each other. | She appeared alongside Frank Sinatra and the rest of the Rat Pack as villainess Marian Stevens in Robin and the Seven Hoods. 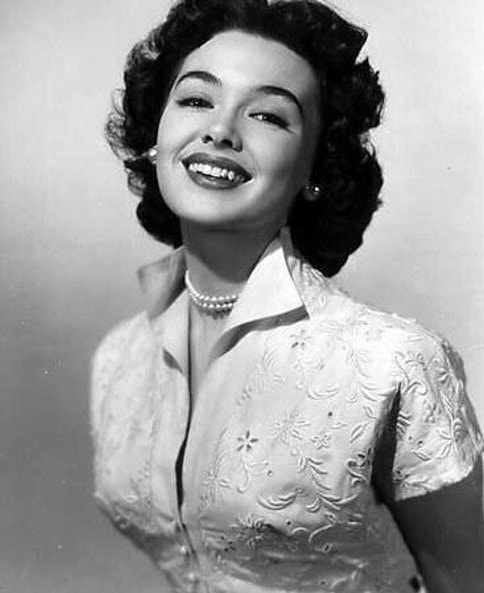 Active - 1950 - 1990  |   Born - Jan 4, 1927 in Denver, CO  |   Genres - Drama, Mystery, Adventure, Romance, Crime  | Height: 5’ 7”
​
The epitome of poise, charm, style and grace, beautiful brunette Barbara Rush was born in Denver, Colorado in 1927 and enrolled at the University of California before working with the University Players and taking acting classes at the Pasadena Playhouse. It didn't take long for talent scouts to spot her and, following a play performance, Paramount quickly signed her up in 1950, making her debut with The Goldbergs (1950).

​Just prior to this, she had met fellow actor Jeffrey Hunter, an incredibly handsome newcomer who would later become a "beefcake" bobbysoxer idol over at Fox. The two fell in love quickly and married in December of 1950. Soon, they were on their way to becoming one of Hollywood's most beautiful and photogenic young couples. Their son Christopher was born in 1952.

While at Paramount, she was decorative in such assembly-line fare as When Worlds Collide (1951), Quebec (1951) and Flaming Feather (1952). She later co-starred opposite some of Hollywood's top leading males: James Mason, Montgomery Clift, Marlon Brando, Dean Martin, Paul Newman, Richard Burton and Kirk Douglas. In most cases, she played brittle wives, conniving "other women" or socialite girlfriend types.

Despite the "A" list movies Barbara was piling up, the one single role that could put her over the top never showed its face. By the early 60s, her film career started to decline. She married publicist Warren Cowan in 1959 and bore a second child, Claudia Cowan, in 1964. TV became a viable source of income for Barbara, appearing in scores of guest parts on the more popular shows of the time while co-starring in standard mini-movie dramas. She even had a bit of fun playing a "guest villainess" on the Batman (1966) series as temptress "Nora Clavicle".

The stage also became a strong focus for Barbara, earning the Sarah Siddons Award for her starring role in "Forty Carats". She made her Broadway debut in the one-woman showcase "A Woman of Independent Means", which also subsequently earned her the Los Angeles Drama Critics Award during its tour. Other showcases included "Private Lives", "Same Time, Next Year", "The Night of the Iguana" and "Steel Magnolias". The still-beautiful Ms. Rush occasionally graces the big and small screen these days, more recently in a recurring role on TV's 7th Heaven (1996).

"I can safely say that every movie role I was ever offered that had any real quality went to someone else."