Best known for playing suave villains in period swashbuckler films, such as The Adventures of Robin Hood (1938) and Captain Blood (1935). | Best known for his roles in horror films, particularly those made by Universal Studios. | Best known for his fencing skills as the greatest swordsman in Hollywood history. | He is credited with creating the definitive screen interpretation of Sherlock Holmes, his only rival generally conceded to be Jeremy Brett's interpretation of the fictional detective. | Nominated for a Best Supporting Actor Oscar twice and lost both times to the same actor, Walter Brennan. The pair of them were the first actors to be nominated for Best Supporting Actor twice. | Was so frequently typecast as a villain that he literally jumped at the first few opportunities he ever got to play Sherlock Holmes because "for once, I got to beat the bad guy instead of play him". Indeed, he played the legendary heroic detective more than any other character in his career. However, by 1946 he had become so sick of the role that he quit his Sherlock Holmes film series and temporarily returned to the Broadway stage. Over the course of his career he had played the super sleuth in 14 films and over 200 radio plays. | Although he has been immortalized as a screen villain, before he played Murdstone in 1935 he had never played a villain and was known, both on film and stage, exclusively as a matinée idol and romantic leading man. | Fought in the British Army during World War I and was awarded the Military Cross for bravery under fire. | Is generally considered the greatest swordsman in Hollywood history, superior even to on-screen foes Errol Flynn and Tyrone Power. However, because he was so frequently cast as the villain, he won only two on-screen duels in his career--as Tybalt in Romeo and Juliet (1936), for which he earned an Oscar nomination, and as Capt. Esteban Pascuale against the friar (Eugene Pallette), who was so outclassed by "the Capitan" he was harmlessly disarmed in a matter of seconds, in The Mark of Zorro (1940). His last, filmed when the actor was 63, was with Danny Kaye in The Court Jester (1955). It is considered by some the best sword fight ever filmed. | He campaigned in vain for the role of Lord Henry Wotton in the film adaptation of Oscar Wilde's novel The Picture of Dorian Gray (1945). He believed that his typecasting as Sherlock Holmes cost him the role and was a contributing factor in his leaving the Universal series. | Was the favorite choice of Gone with the Wind (1939) author Margaret Mitchell to play the role of Rhett Butler. | Was in five films that were nominated for Best Picture Oscars: David Copperfield (1935), A Tale of Two Cities (1935), Captain Blood (1935), Romeo and Juliet (1936) and The Adventures of Robin Hood (1938). | He and Tyrone Power were two of Hollywood's most accomplished fencing masters but for safety reasons preferred dueling with their fencing instructors for scenes which didn't include close ups of both stars. 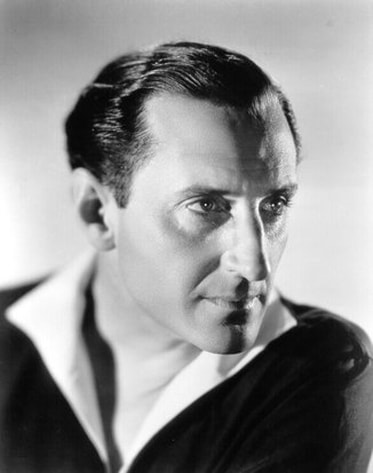 Active - 1921 - 1967  |   Born - Jun 13, 1892 in Johannesburg, South Africa  |   Died - Jul 21, 1967 in New York City, NY  |   Genres - Drama, Mystery, Romance, Comedy, Adventure  | Height: 6’ 1½”
​
Basil Rathbone was born in Johannesburg, South Africa, in 1892, but three years later his family was forced to flee the country because his father was accused by the Boers of being a British spy at a time when Dutch-British conflicts were leading to the Boer War. The Rathbones escaped to England, where Basil and his two younger siblings, Beatrice and John, were raised. Their mother, Anna Barbara (George), was a violinist, who was born in Grahamstown, South Africa, of British parents, and their father, Edgar Philip Rathbone, was a mining engineer born in Liverpool. From 1906 to 1910 Rathbone attended Repton School, where he was more interested in sports--especially fencing, at which he excelled--than studies, but where he also discovered his interest in the theater. After graduation he planned to pursue acting as a profession, but his father disapproved and suggested that his son try working in business for a year, hoping he would forget about acting. Rathbone accepted his father's suggestion and worked as a clerk for an insurance company--for exactly one year. Then he contacted his cousin Frank Benson, an actor managing a Shakespearean troupe in Stratford-on-Avon.

Rathbone was hired as an actor on the condition that he work his way through the ranks, which he did quite rapidly. Starting in bit parts in 1911, he was playing juvenile leads within two years. In 1915 his career was interrupted by the First World War. During his military service, as a second lieutenant in the Liverpool Scottish 2nd Battalion, he worked in intelligence and received the Military Cross for bravery. In 1919, released from military service, he returned to Stratford-on-Avon and continued with Shakespeare but after a year moved onto the London stage. The year after that he made his first appearance on Broadway and his film debut in the silent Innocent (1921).

For the remainder of the decade Rathbone alternated between the London and New York stages and occasional appearances in films. In 1929 he co-wrote and starred as the title character in a short-running Broadway play called "Judas". Soon afterwards he abandoned his first love, the theater, for a film career. During the 1920s his roles had evolved from the romantic lead to the suave lady-killer to the sinister villain (usually wielding a sword), and Hollywood put him to good use during the 1930s in numerous costume romps, including Captain Blood (1935), David Copperfield (1935), A Tale of Two Cities (1935), Anna Karenina (1935), The Last Days of Pompeii (1935), The Adventures of Robin Hood (1938), Tower of London (1939), The Mark of Zorro (1940) and others. Rathbone earned two Oscar nominations for Best Supporting Actor as Tybalt in Romeo and Juliet (1936) and as King Louis XI in If I Were King (1938).

However, it was in 1939 that Rathbone played his best-known and most popular character, Sherlock Holmes, with Nigel Bruce as Dr. Watson, first in The Hound of the Baskervilles (1939) and then in The Adventures of Sherlock Holmes (1939), which were followed by 12 more films and numerous radio broadcasts over the next seven years.

Feeling that his identification with the character was killing his film career, Rathbone went back to New York and the stage in 1946. The next year he won a Tony Award for his portrayal of Dr. Sloper in the Broadway play "The Heiress," but afterwards found little rewarding stage work. Nevertheless, during the last two decades of his life, Rathbone was a very busy actor, appearing on numerous television shows, primarily drama, variety and game shows; in occasional films, such as Casanova's Big Night (1954), The Court Jester (1955), Tales of Terror (1962) and The Comedy of Terrors (1963); and in his own one-man show, "An Evening with Basil Rathbone", with which he toured the U.S.
​
- IMDb Mini Biography By: Lyn Hammond​​

"When you become the character you portray, it's the end of your career as an actor."

"Never regret anything you have done with a sincere affection; nothing is lost that is born of the heart."