Betty Grable’s legs were insured by her studio for one million dollars per leg at Lloyds of London. | Grable’s famous bathing suit photo became the number one pin-up picture during World War II. | She is one of the original Goldwyn Girls, others include Lucille Ball, and Paulette Goddard. | Her 2 1/2 year relationship with George Raft ended because he couldn’t get a divorce from his Catholic wife. | After her husband spent all her savings, Betty Grable did Playtex 18 hr shortie commercials in the 1960’s using her famous pin-up pose. | In 1946-1947 the Treasury Department noted that Betty Grable was the highest paid woman in America, earning $300,000 a year. | Betty Grable was engaged to Artie Shaw (a popular band leader) who, unbeknown to her, was secretly engaged to Judy Garland as well. Both Betty & Judy were shocked to find out one morning that Artie had eloped with Lana Turner the day after meeting her. The joke was on Artie though, he & Lana divorced four months later. | Martha Raye was actually voted the girl with the million dollar legs, but she turned down the honor because she knew her studio would put her on a long publicity tour & she wanted to spend more time touring with the USO for the troops instead. So Martha told them to give the award to the runner up; Betty Grable. Betty never forgot that it was Martha's kindness that launched her career. | When Betty was filming "How to Marry a Millionaire" she knew that her co-star Marilyn Monroe would take her place as the lead star at "Fox Studios", but by then she'd had her fill of stardom. Betty once again remembered what Martha had done for her, So Betty took her co-star to her long time dressing room (the best on the lot) and told Marilyn that it was her. Marilyn was shocked that Betty would offer it to her and asked Betty why. Betty replied "Honey, I've had my time in the spotlight, now it's your turn!". | Hugh Hefner, founder of Playboy noted on National Public Radio's Morning Edition on April 23, 2007, in an interview with Terry Gross that Grable was his inspiration for founding the Playboy empire. | When Shelley Winters bowed out of Pickup on South Street (1953), a pregnant Grable turned down the offer of starring in the film noir, and the role went to Jean Peters. | In the famous pin-up pic of Betty Grable, she was wearing an ankle bracelet given to her by her then-suitor, George Raft. 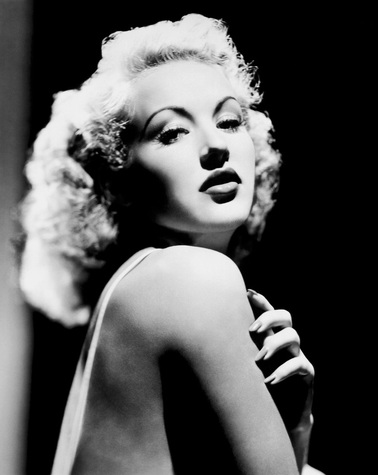 Betty and her mother set out for California with the hopes of stardom. She attended the Hollywood Professional school but Lillian lied about her daughter's age and Betty (real age 13), landed several minor parts as a chorus girl in early musicals (Whoopee! (1930), New Movietone Follies of 1930 (1930), Happy Days (1929) and Let's Go Places (1930)), initially billed as 'Frances Dean'. In 1932 (real age 15), she signed with RKO Radio Pictures and began to use the moniker 'Betty Grable'. The bit parts continued for the next three years. Betty finally landed a substantial part in By Your Leave (1934). One of her big roles was in College Swing (1938). Unfortunately, the public did not seem to take notice.

The following year, she married former child star Jackie Coogan. They briefly toured on vaudeville and his success boosted hers, but they divorced in 1940. When she landed the role of Glenda Crawford in Down Argentine Way (1940), the public finally took notice of this shining bright star. Stardom came in such comedies as Coney Island (1943) and Sweet Rosie O'Grady (1943).

The public was enchanted with Betty. Her famous pin-up pose during World War II adorned barracks all around the world. With that pin-up and as the star of lavish musicals, Betty became the highest-paid star in Hollywood. After the war, her star continued to rise. In 1947, the United States Treasury Department noted that she was the highest paid star in America, earning about $300,000 a year - a phenomenal sum even by today's standards. Later, 20th Century-Fox, who had her under contract, insured her legs with Lloyds of London for a million dollars. She continued to be popular until the mid-1950s, when musicals went into a decline. Her last film was How to Be Very, Very Popular (1955).

She then concentrated on Broadway and nightclubs. In 1965, she divorced band leader Harry James, whom she had wed in 1943. Her life was an active one, devoid of the scandals that plagued many stars in one way or another. She cared more for her family than stardom.

"You're better off betting on a horse than betting on a man. A horse may not be able to hold you tight, but he doesn't wanna wander from the stable at night."

"The practice of putting women on pedestals began to die out when it was discovered that they could give orders better from there."