He was considered a late bloomer in Hollywood; Frankenstein (1931) premiered when he was 44 years old. | A photograph of Karloff in his Frankenstein (1931) monster makeup appears on one stamp of a sheet of 10 USA 37¢ commemorative postage stamps, issued 25 February 2003, celebrating American Filmmaking: Behind the Scenes. The stamp, which honors makeup artists, shows Jack P. Pierce and an unidentified assistant applying the monster makeup. | In contrast to the image he presented in most of his films, the private Karloff was, by every account, a quiet, bookish man off- screen. A true gentleman, he had many friends, both in and out of show business, and he was particularly fond of children. For the latter, among other things, he recorded many successful albums of children's stories. | When told by a mutual friend that Bobby Pickett, who recorded the hit song "Monster Mash", was a huge fan of his, Karloff replied, "Tell him I enjoy his record very much." Pickett still considers that the greatest compliment he has ever gotten, and Karloff eventually sang the song himself on a television special. | His favorite author was Joseph Conrad. In the 1950s, he was cast as Kurtz in a production of Conrad's "Heart of Darkness" on Playhouse 90 (1956). | In the final years of his life, walking, and even just standing, became a painful ordeal. Some directors would change the script to place Karloff's character in a wheelchair, so that he would be more comfortable. | According to daughter Sara Karloff, he had to have three major back surgeries in his lifetime as a result of carrying Colin Clive up the stairs of the windmill in the climax of Frankenstein (1931). | He appeared in 80 films before his breakthrough role in Frankenstein (1931). | During the production of Frankenstein (1931) there was some concern that seven-year-old Marilyn Harris, who played Maria, the little girl thrown into the lake by the creature, would be overly frightened by the sight of Karloff in costume and make-up when it came time to shoot the scene. When the cast was assembled to travel to the location, Marilyn ran from her car directly up to Karloff, who was in full make-up and costume, took his hand and asked "May I drive with you?". Delighted, and in typical Karloff fashion, he responded, "Would you, darling?". She then rode to the location with "The Monster". | He was the biggest star to lend his voice to a sound effect. Universal added his anguished scream over the dead Ygor from Son of Frankenstein (1939) to its stock sound effects library and used it for subsequent films, including House of Frankenstein (1944) (the cry when Daniel the hunchback falls from the roof). | Took out his false teeth to achieve the metamorphosis in The Haunted Strangler (1958). | Never legally changed his name to Boris Karloff. He always signed contracts and documents as "William Henry Pratt aka Boris Karloff". | Karloff got the role in The Criminal Code (1930), a breakthrough role for him, because he was broke. He could not go to the Masquers Club because he could not pay his dues and could not afford his second choice, a cup of coffee, so he went to Actors' Equity, where he learned that there was casting for the role. | His performance as Frankenstein's Monster was an inspiration for the Marvel comics character the Incredible Hulk. | He appeared with Bela Lugosi in eight films: Gift of Gab (1934) The Black Cat (1934), The Raven (1935), The Invisible Ray (1936), Son of Frankenstein (1939), You'll Find Out (1940), Black Friday (1940) and The Body Snatcher (1945). | Boris Karloff owed his fame, and thereby his subsequent career , to actor Bela Lugosi: if it weren't for Lugosi turning down the role of Frankenstein (1931) because of the heavy makeup and the part being mute, the role would have never been available for Karloff, who until then had only been an extra and played heavies. | Although he came close in a deleted scene from The Mummy (1932), much like fellow horror actor, Bela Lugosi, Boris Karloff never once got to share a kiss with a female co-star in a romantic scene during his entire Hollywood career. This was in part attributed to the fact that Karloff was dark-skinned due to his Indian heritage, and it would not have been acceptable in the old Hollywood of his era. | When his daughter was born, he rushed from the hospital in full make up as Frankenstein's monster. 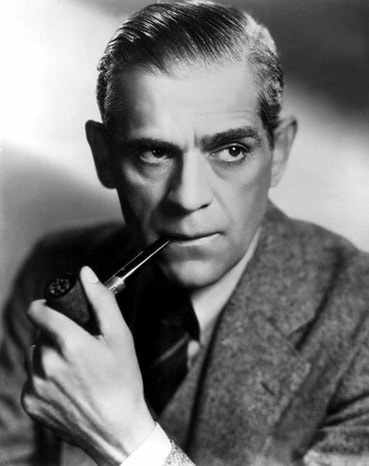 He was educated at London University in anticipation that he would pursue a diplomatic career; however, he emigrated to Canada in 1909 and joined a touring company based out of Ontario and adopted the stage name of "Boris Karloff." He toured back and forth across the USA for over ten years in a variety of low-budget theater shows and eventually ended up in Hollywood, reportedly with very little money to his name. Needing cash to support himself, Karloff secured occasional acting work in the fledgling silent film industry in such pictures as The Deadlier Sex (1920), Omar the Tentmaker (1922), Dynamite Dan (1924) and Tarzan and the Golden Lion (1927), in addition to a handful of serials (the majority of which sadly haven't survived). Karloff supplemented his meager film income by working as a truck driver in Los Angeles, which allowed him enough time off to continue to pursue acting roles.

His big break came in 1931 when he was cast as "the monster" in the Universal production of Frankenstein (1931), directed by James Whale, one of the studio's few remaining auteur directors. The aura of mystery surrounding Karloff was highlighted in the opening credits, as he was listed as simply "?". The film was a commercial and critical success for Universal, and Karloff was instantly established as a hot property in Hollywood. He quickly appeared in several other sinister roles, including Scarface (1932) (filmed before Frankenstein (1931)), the black-humored The Old Dark House (1932), as the namesake Oriental villain of the Sax Rohmer novels in The Mask of Fu Manchu (1932), as undead Im-Ho-Tep in The Mummy (1932) and the misguided Prof. Morlant in The Ghoul (1933). He thoroughly enjoyed his role as a religious fanatic in John Ford's The Lost Patrol (1934), although contemporary critics described it as a textbook example of overacting.

He donned the signature make-up, neck bolts and asphalt spreader's boots again to play Frankenstein's monster in the sensational The Bride of Frankenstein (1935) and the less thrilling Son of Frankenstein (1939). Karloff, on loan to Fox, appeared in one of the best of the Warner Oland Chan entries, Charlie Chan at the Opera (1936), before beginning his own short-lived Mr. Wong detective series. He was a wrongly condemned doctor in Devil's Island (1939), shaven-headed executioner "Mord the Merciless" in Tower of London (1939), another misguided scientist in The Ape (1940), a crazed scientist surrounded by monsters, vampires and werewolves in House of Frankenstein (1944), a murderous cabman in The Body Snatcher (1945) and a Greek general fighting vampirism in the Val Lewton thriller Isle of the Dead (1945).

While Karloff continued appearing in a plethora of films, many of them were not up to the standards of his previous efforts, including appearances in two of the hokey Bud Abbott and Lou Costello monster movies (he had appeared with them in an earlier superior effort, Bud Abbott Lou Costello Meet the Killer Boris Karloff (1949), which theater owners often added his name to the marquee), the low point of the Universal-International horror movie cycle. During the 1950s he was a regular guest on many high-profile TV shows including The Milton Berle Show (1948), Tales of Tomorrow (1951), The Veil (1958), The Donald O'Connor Show (1954), The Red Skelton Hour (1951) and The Dinah Shore Chevy Show (1956), to name but a few, and he appeared in a mixed bag of films including Sabaka (1954) and Voodoo Island (1957). On Broadway he appeared as the murderous Brewster brother in the hit, "Arsenic and Old Lace" (his role, or the absence of him in it, was amusingly parodied in the film version) and a decade later he enjoyed a long run in "Peter Pan," perfectly cast as "Captain Hook."

His career experienced something of a revival in the 1960s thanks to hosting the TV anthology series Thriller (1960) and indie director Roger Corman, with Karloff contributing wonderful performances in The Raven (1963), The Terror (1963), the ultra-eerie Black Sabbath (1963) and the H.P. Lovecraft-inspired Monster of Terror (1965). Karloff's last great role was as an aging horror movie star confronting a modern-day sniper in the Peter Bogdanovich film Targets (1968). In 1970, he played the blind sculptor Franz Badulescu in Cauldron of Blood (1970), written, produced, and directed by Edward Mann, who had also come to the art of film from stage theater. His TV career was capped off by achieving Christmas immortality as the narrator of Chuck Jones's perennial animated favorite, How the Grinch Stole Christmas! (1966). Three low-budget Mexican-produced horror films starring an ailing Karloff were released in the two years after his death; however, they do no justice to this actor. In retrospect, he never took himself too seriously as an actor and had a tendency to downplay his acting accomplishments. Renowned as a refined, kind and warm-hearted gentleman, with a sincere affection for children and their welfare, Karloff passed away on February 2, 1969 from emphysema. Respectful of his Indian roots and in true Hindu fashion, he was cremated at Guildford Crematorium, Godalming, Surrey, England, where he is commemorated by a plaque in Plot 2 of the Garden of Remembrance.

[on his rival, Bela Lugosi] "Poor old Bela, it was a strange thing. He was really a shy, sensitive, talented man who had a fine career on the classical stage in Europe, but he made a fatal mistake. He never took the trouble to learn our language. He had real problems with his speech and difficulty interpreting lines."

"My dear old monster. I owe everything to him. He's my best friend."