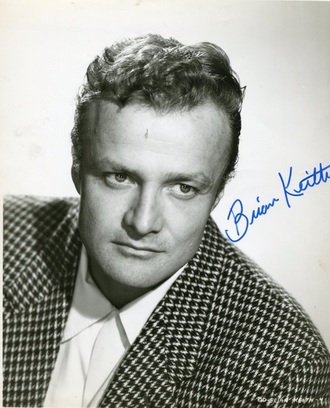 The son of actor Robert Keith (1896-1966), Brian Keith made his first film appearance in 1924’s Pied Piper Malone, when he was well-below the age of consent. During the war years, Keith served in the Marines, winning a Navy Air Medal; after cessation of hostilities, he began his acting career in earnest. At first billing himself as Robert Keith Jr., he made his 1946 Broadway debut in Heyday, then enjoyed a longer run as Mannion in Mister Roberts (1948), which featured his father as “Doc.”

His film career proper began in 1952; for the rest of the decade, Keith played good guys, irascible sidekicks and cold-blooded heavies with equal aplomb. Beginning with Ten Who Dared (1959), Keith became an unofficial “regular” in Disney Films, his performances alternately subtle (The Parent Trap) and bombastic. Of his 1970s film efforts, Keith was seen to best advantage as Teddy Roosevelt in The Wind and the Lion (1975). In television since the medium was born, Keith has starred in several weekly series, including The Crusader (1955-56), The Little People (aka The Brian Keith Show, 1972-74) and Lew Archer (1975). His longest-running and perhaps best-known TV endeavors were Family Affair (1966-71), in which he played the uncharacteristically subdued “Uncle Bill” and the detective series Hardcastle & McCormick (1983-86). His most fascinating TV project was the 13-week The Westerner (1960), created by Sam Peckinpah, in which he played an illiterate cowpoke with an itchy trigger finger. Keith’s personal favorite of all his roles is not to be found in his film or TV output; it is the title character in Hugh Leonard’s stage play Da.

Plagued by emphysema and lung cancer while apparently still reeling emotionally from the suicide of his daughter Daisy, 75-year-old Brian Keith was found dead of a gunshot wound by family members in his Malibu home. Police ruled the death a suicide. Just prior to his death, Keith had completed a supporting role in the TNT miniseries Rough Riders.

Available Films:
Trivia:
Met a young actor James Drury while making the movie, Ten Who Dared (1960); they became and remained friends until Keith’s suicide in 1997. Met actor Michael Landon on an episode of Crusader (1955). The two became good friends from 1956 until Landon’s death in 1991. Was offered the role of Deke Thornton in The Wild Bunch (1969), but turned it down, because he was under contract working on Family Affair (1966).