Until filming All the King's Men, Crawford's career had been largely limited to "B films" in supporting or character roles. He realized he did not fit the role of a handsome leading man, once describing himself as looking like a "retired pugilist". | Probably best known for the "10-4" sign off on his patrol car radio in the TV series Highway Patrol (1955) of the '50s. | His parents, Lester Crawford and Helen Broderick, were both vaudeville performers, as his grandparents had been. | Crawford was originally stereotyped as a fast-talking tough guy early in his career and often played villainous parts. | Appeared on Broadway for the second (and last) time as "Lennie" in John Steinbeck's "Of Mice and Men" in 1937, which established him as an actor. One of his co-stars was Will Geer. | During World War 2, he was a regular radio announcer for the Armed Forces Network, introducing broadcasts of live musical performances for such artists as Glenn Miller's Air Force Band. | When Crawford signed a contract with Paramount, He appeared in some "B" films: Ambush (1939), Sudden Money (1939) and Undercover Doctor (1939). He had a good role in the prestigious Beau Geste. | In 1955, television producer Frederick Ziv of ZIV Television Productions offered Crawford the lead role as "Dan Mathews" in the police drama Highway Patrol, which dramatized law enforcement activities of the California Highway Patrol (CHP). | His last role was as a film producer who is murdered in a 1982 episode of the Simon & Simon television series. The actor who played the part of the suspected murderer was Stuart Whitman, who had played the recurring part of Sergeant Walters on Highway Patrol. | His popularity on "Highway Patrol" also led to him being memorialized in the poker game of Texas Hold 'em, in that a starting hand of a 10-4 (a common police radio code) is nicknamed a "Broderick Crawford". 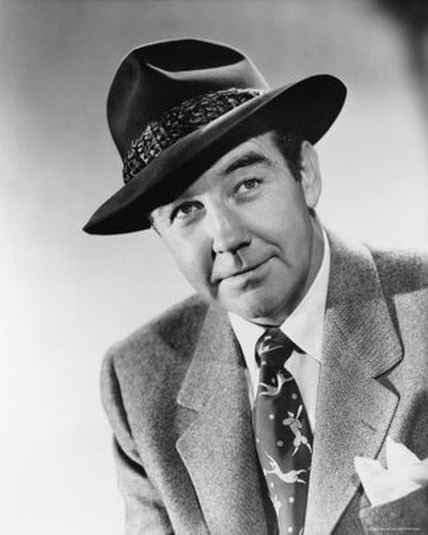 He was born William Broderick Crawford on December 9, 1911, in Philadelphia, Pennsylvania, to vaudeville performers Lester Crawford and Helen Broderick, his mother had a brief movie career acting in Hollywood comedies. Broderick Crawford, large and burly, was no one's idea of a leading man due to his rough-and-tumble looks, but he broke through playing John Steinbeck's simple-minded giant Lenny in the Broadway adaptation of Steinbeck's novella, "Of Mice and Men". After this Broadway success, Crawford moved to Hollywood and made his cinema debut in the comedy Woman Chases Man (1937), in a supporting role to stars Joel McCrea and Miriam Hopkins. When producer-director Lewis Milestone was casting the movie version of Steinbeck's classic (Of Mice and Men (1939)), he passed over Crawford and selected Lon Chaney Jr. to play Lenny.

After many supporting roles (including a memorable turn as a big but kind-hearted lug in the comedy Larceny, Inc (1942)) and a stint in the military during World War II, Crawford had his breakthrough role in Robert Rossen's adaptation of Robert Penn Warren's Pulitzer Prize-winning novel, "All the King's Men". Crawford gave a masterful performance as the Southern politician based on Louisiana's Huey Long. In addition to the Oscar, he also won the New York Film Critics' Award as Best Actor. All the King's Men (1949) was a hit, as was Born Yesterday (1950). (Crawford had also played the role on Broadway, succeeding Paul Douglas, who originated the role.) However, Crawford soon after became typecast as a crude or brutish.

Five years after copping the Academy Award, TV producer Frederick W. Ziv hired Crawford to play the lead role in his syndicated police drama, "Highway Patrol". The show ran for four seasons. Moribund in the early 1950s, his career revived but generally eschewed the big screen, preferring television, for the remainder of his career. He continued to act almost up until his death in Rancho Mirage, California, on April 26, 1986 at age 74, following a series of strokes.
​
- IMDb Mini Biography By: Jon C. Hopwood​​

"My trademarks are a hoarse, grating voice and the face of a retired pugilist: small narrowed eyes set in puffy features which look as though they might, years ago, have lost on points."