Became a father for the first time at age of 62 when his fourth wife Dyan Cannon gave birth to their daughter Jennifer Diane Grant (aka Jennifer Grant) on February 26, 1966. | Ian Fleming modeled the James Bond character partially with Grant in mind. | From 1932-44 he shared a house with Randolph Scott, whom he met on Hot Saturday (1932). Scott often jokingly referred to Grant as his spouse. The 1940 census report shows Scott as head of household and Grant as his partner. Many studio heads threatened not to employ them together, unless they lived separately. Grant's marriage to Barbara Hutton permanently dissolved his living arrangement with Scott. | He gave his entire fee for The Philadelphia Story (1940) to the British war effort. | Donated his entire salary for Arsenic and Old Lace (1943) ($100,000) to the U.S. War Relief Fund. | Turned down the role of James Bond in Dr. No (1962), believing himself to be too old at age 58 to play the hero. The role went to Sean Connery instead. | He never said "Judy, Judy, Judy" in the movies, which he credits to Larry Storch, but he did say "Susan, Susan, Susan" in Bringing Up Baby (1938). | He was originally supposed to play Humphrey Bogart's role in, Sabrina (1954), but turned it down, supposedly because he did not want to carry an umbrella onscreen. | Although he became a Paramount Pictures contract player early in his film career, when the contract was up he made an unusual decision for the time: he decided to freelance. Because his films were so successful at the box office, he was able to work at any studio he chose for the majority of his career. | Thanks mainly to the strength and physical dexterity he gained as an acrobat when he was young, he did a majority of his own stunts during his film career (far more than people would think). | People were surprised by his retirement in 1966 and, despite the attempts of directors as important as Howard Hawks, Billy Wilder, and even Stanley Kubrick to get him out of retirement and into their films, he never worked again. | In His Girl Friday (1940), his character remarks, "Archie Leach said that", a reference to his real name. | Was largely self-educated, as he had dropped out of school at age 14. However, he was a voracious reader throughout his life. | Often spoke of his relationship with Sophia Loren as one of the most passionate romances in his life. She was almost 31 years his junior. | Participated in an experimental psychotherapy program in which he was prescribed LSD. Betsy Drake encouraged him to take the drug (as part of a medical experiment), as he wanted to examine his failed marriages. He underwent about 100 sessions, and said that he benefited greatly from them. However in later life, he said he would not have experimented with LSD if he had known about the side-effects, and asked people not to use drugs. | Maintained a year-round suntan to avoid wearing makeup. | Replaced James Stewart as hapless ad man Roger Thornhill in North by Northwest (1959). Stewart very much wanted the role, but director Alfred Hitchcock decided not to cast him because of the box-office failure of Vertigo (1958), which Hitchcock blamed on Stewart for looking "too old" and chose Grant instead, even though he was actually four years older. | Was the original choice to play Rupert Cadell in Rope (1948), but he was unavailable, so the role went to James Stewart, instead (whom Grant would later replace as the lead in North by Northwest (1959)). Rope (1948) features references to Grant and the earlier Hitchcock film he appeared in, Notorious (1946) with Ingrid Bergman. | Hated his performance in Arsenic and Old Lace (1943), saying it was way too over the top and that it was his least favorite film. | Said Indiscreet (1958), to be his personal favorite film. | Smoked up to 60 cigarettes a day until 1957, when his third wife Betsy Drake made him give up in order to protect his voice. He quit smoking while filming An Affair to Remember (1957) after visiting a hypnotist. However, she recalled occasionally catching him smoking outside the house, so he probably never stopped completely. | Turned down the role of gunfighter Cherry Valance, which was to have been much larger, in Howard Hawks' epic western Red River (1948) opposite John Wayne and Montgomery Clift. The role went to John Ireland instead. | He turned down the role of Humbert Humbert in Lolita (1962) because he considered the film "depraved". | He strongly disliked Method acting and never played a villain. | Ran away from home at age 13 to join a mime troupe. His father tracked him down and brought him home, but he ran away again and rejoined the troupe. | Unlike several other major movie stars in his day, including James Stewart, John Wayne, Gary Cooper, etc., Grant never went bald and never needed to wear a toupee. Although he did dye his hair back to its natural black color when it started to gray in the 1950s, when he retired from acting in the 1960s he stopped dying it and his hair was all white by the time of his passing. | He played Irene Dunne's husband in three movies: The Awful Truth (1937), My Favorite Wife (1940) and Penny Serenade (1941). | He turned down the lead role in Gentleman's Agreement (1947) because he contended he was Jewish and thought he looked Jewish. He maintained, "The public won't believe my portrayal of a gentile trying to pass himself off as a Jew.". | He appeared in four films directed by Alfred Hitchcock: Suspicion (1941), Notorious (1946), To Catch a Thief (1955) and North by Northwest (1959). | Alfred Hitchcock wanted to cast him in Dial M for Murder (1954), but Warner Brothers felt that he would be miscast as a villain. 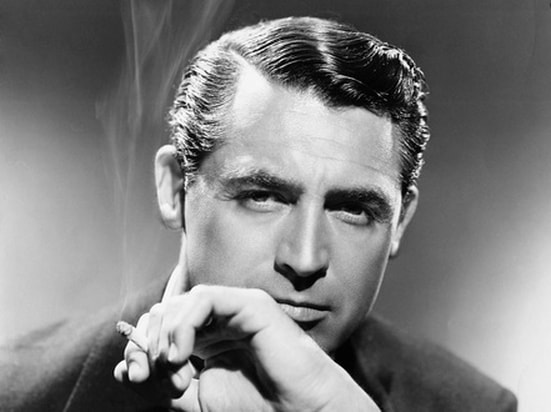 Cary Grant was born Archibald Alec Leach on January 18, 1904 in Horfield, Bristol, England, to Elsie Maria (Kingdon) and Elias James Leach, who worked in a factory. His early years in Bristol would have been an ordinary lower-middle-class childhood, except for one extraordinary event. At age nine, he came home from school one day and was told his mother had gone off to a seaside resort. However, the real truth was that she had been placed in a mental institution, where she would remain for years, and he was never told about it (he would not see his mother again until he was in his late 20s).

He left school at age 14, lying about his age and forging his father's signature on a letter to join Bob Pender's troupe of knockabout comedians. He learned pantomime as well as acrobatics as he toured with the Pender troupe in the English provinces, picked up a Cockney accent in the music halls in London, and then in July 1920, was one of the eight Pender boys selected to go to the United States. Their show on Broadway, "Good Times", ran for 456 performances, giving Grant time to acclimatize. He would stay in America. Mae West wanted Grant for She Done Him Wrong (1933) because she saw his combination of virility, sexuality and the aura and bearing of a gentleman. Grant was young enough to begin the new career of fatherhood when he stopped making movies at age 62.

One biographer said Grant was alienated by the new realism in the film industry. In the 1950s and early 1960s, he had invented a man-of-the-world persona and a style - "high comedy with polished words". In To Catch a Thief (1955), he and Grace Kelly were allowed to improvise some of the dialogue. They knew what the director, Alfred Hitchcock, wanted to do with a scene, they rehearsed it, put in some clever double entendres that got past the censors, and then the scene was filmed. His biggest box-office success was another Hitchcock 1950s film, North by Northwest (1959) made with Eva Marie Saint since Kelly was by that time Princess of Monaco.

Although Grant retired from the screen, he remained active. He accepted a position on the board of directors at Faberge. By all accounts this position was not honorary, as some had assumed. Grant regularly attended meetings and traveled internationally to support them. The position also permitted use of a private plane, which Grant could use to fly to see his daughter wherever her mother Dyan Cannon, was working. He later joined the boards of Hollywood Park, the Academy of Magical Arts (The Magic Castle - Hollywood, California), Western Airlines (acquired by Delta Airlines in 1987) and MGM.

Grant expressed no interest in making a career comeback. He was in good health until almost the end of his life, when he suffered a mild stroke in October 1984. In his last years, he undertook tours of the United States in a one-man-show, "A Conversation with Cary Grant", in which he would show clips from his films and answer audience questions. On November 29, 1986, Cary Grant died at age 82 of a cerebral hemorrhage in Davenport, Iowa.


"[Charles Chaplin] is waiting a long time at a trolley car stop. He's the first in line of what turns out to be a huge crowd. The trolley finally arrives, he's the first one on, but then the crowd behind him surges through the door and pushes him right through the door on the other side. And that's a lot like what Hollywood is like. When you're a young man, Douglas Fairbanks Sr. is driving. Wallace Beery is the conductor, and Charles Chaplin's got a front-row seat. You take your seat, and back behind you is Gary Cooper. He has got his long feet stuck out in front of one of the exit doors, and people keep tripping over him and onto the street. Suddenly a young man named Tyrone Power gets on. He asks you to move over. You make a picture with Joan Fontaine. You think you do a good job, but she wins the Oscar, and you get nothing. And pretty soon more and more people get on, it's getting very crowded, and then you decide to get off. When you get off the trolley, you notice that it's been doing nothing but going around in circles. It doesn't go anywhere. You see the same things over and over. So you might as well get off."

"If I had known then what I know now, if I had not been so utterly stupid, I would have had 100 children and I would have built a ranch to keep them on."

"I have no rapport with the new idols of the screen, and that includes Marlon Brando and his style of Method acting. It certainly includes Montgomery Clift and that God-awful James Dean. Some producer should cast all three of them in the same movie and let them duke it out. When they've finished each other off, James Stewart, Spencer Tracy and I will return and start making real movies again like we used to."