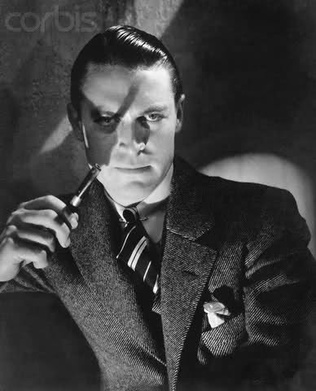 Chester Morris was the son of actors William Morris and comedienne Etta Hawkins; Morris’ siblings, Adrian and Wilhelmina, later became performers as well. Reportedly in silent films at the age of nine, Morris’ certified Broadway debut, at 15, was in Lionel Barrymore’s The Copperhead; that same year (1917), Morris graduated from the New York School of Fine Arts. He billed himself as “the youngest leading man in the country” -- which, at 17, he may very well have been.

He was Oscar-nominated for his first talking-picture role in Alibi (1929). Morris spent the 1930s alternating between tough-guy stuff like The Big House (1930) and tux-and-tails assignments in films like The Divorcee (1930). From 1940 through 1949, Morris starred as Boston Blackie in a lively series of Columbia B-pictures, a role which gave him opportunities to indulge his fondness for elaborate makeups and sleight-of-hand. During the 1950s, Morris headlined the touring companies of several Broadway plays, including Detective Story and Advise and Consent; he also hosted the syndicated TV anthology Captured. Chester Morris died of a barbiturate overdose while he was starring in a Bucks County Playhouse production of Caine Mutiny Court Martial; his last film, The Great White Hope, was released shortly after his death.

Available Films:
Trivia:
In 1952, received the deathbed confession of his friend, Roland West, for the murder of Thelma Todd in 1935.

The Boston haircut where the hair was combed straight back over the crown and cut level at the back was a popular style in the 1940s. The style was made famous by the character of Boston Blackie, played by Chester in 14 films, and it’s thought that this is the origin of the name.

[after appearing in thirteen ‘Boston Blackie’ pictures] “After that, a producer wouldn’t put me in an ‘A’ movie even if I paid for the privilege. The only thing I could do was get out and go back to the theater.”