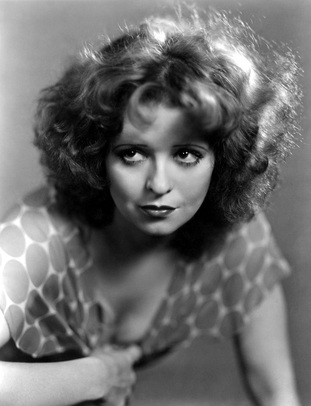 Famous as the “It” girl of the Roaring 20s; Clara Bow was the flapper to end all flappers. The daughter of a Coney Island waiter, she spent her youth in poverty. At 16 she won a movie magazine beauty contest; part of the prize was a trip to visit the New York studios and a bit part in a silent, soon leading to other roles mostly in low-budget films. Under contract to producer B.P. Schulberg, she went with Schulberg from New York to Hollywood’s Paramount, where the studio’s publicity machine helped mold her into a star, particularly after Mantrap (1926), her first smash hit.

Soon she became a symbol of the emancipated woman during the flapper age: vibrant, liberated, energetic. Her bobbed hair, bow lips, and sparkling eyes came to represent the era, and her bangled, beaded “look” soon became imitated by women throughout America. After appearing in the film It (1927) she became known as the “It” girl, a woman with “something extra” which set her apart from the common herd. While living the life of the Roaring 20s, however, she became the victim of numerous scandals and quickly fell from grace with the public (which in a 1928 poll had named her America’s favorite actress). With the advent of sound, her career ground to a halt. In 1931 she eloped with cowboy star Rex Bell, who eventually became lieutenant governor of Nevada. Bow retired from the screen in 1933.

Trivia:
Had a turbulent love affair with actor Bela Lugosi (who had yet to deliver his legendary screen performance in Dracula (1931)) in the late ‘20s. Lugosi had a nude portrait of Bow hanging in the bedroom of his small Hollywood apartment for the rest of his life.

[asked for her thoughts on Marilyn Monroe after Monroe’s death] “A sex symbol is a heavy load to carry when one is tired, hurt and bewildered.”

We're in the process of identifying which of our films are in the Public Domain, and offering these for sale on DVD.
​Please stay Tuned...!
Check out our new Film Noir Collection:
Coffee Mugs!
Phone Cases!
iPad Cases!
More coming soon!