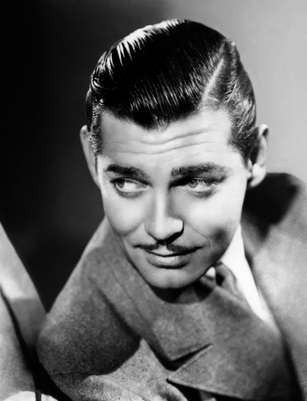 The son of an Ohio oil driller and farmer, American actor Clark Gable had a relatively sedate youth until, at age 16, he was talked into traveling to Akron with a friend to work at a tire factory. It was in Akron that Gable saw his first stage play, and, from that point on, he was hooked.

A 1930 Los Angeles stage production of The Last Mile starring Gable as Killer Mears brought the actor to the attention of film studios, though many producers felt that Gable’s ears were too large for him to pass as a leading man. Making his talkie debut in The Painted Desert (1931), the actor’s first roles were as villains and gangsters. By 1932, he was a star at MGM where, except for being loaned out on occasion, he’d remain for the next 22 years. On one of those occasions, Gable was “punished” for insubordination by being sent to Columbia Studios, then a low-budget factory. The actor was cast by ace director Frank Capra in It Happened One Night (1934), an amiable comedy which swept the Academy Awards in 1935, with one of those Oscars going to Gable. After that, except for the spectacular failure of Gable’s 1937 film Parnell, it seemed as though the actor could do no wrong. And, in 1939, and despite his initial reluctance, Gable was cast as Rhett Butler in Gone With the Wind, leading him to be dubbed the “King of Hollywood.”

A happy marriage to wife number three, Carole Lombard, and a robust off-camera life as a sportsman and athlete (Gable enjoyed a he-man image created by the MGM publicity department, and perpetuated it on his own) seemed to bode well for the actor’s future contentment. But when Lombard was killed in a 1942 plane crash, a disconsolate Gable seemed to lose all interest in life. Though far beyond draft age, he entered the Army Air Corps and served courageously in World War II as a tail-gunner. But what started out as a death wish renewed his vitality and increased his popularity. (Ironically, he was the favorite film star of Adolf Hitler, who offered a reward to his troops for the capture of Gable -- alive).

Available Films:
Trivia:
1942: He enlisted in the army in honor of his late wife, Carole Lombard. She had been killed in a plane crash while on tour selling war bonds.

“Everything Marilyn (Monroe) does is different from any other woman, strange and exciting, from the way she talks to the way she uses that magnificent torso.”

“Working with Marilyn Monroe on ‘The Misfits’ (1961) nearly gave me a heart attack. I have never been happier when a film ended.”

[on Spencer Tracy] “The guy’s good. There’s nobody in the business who can touch him, and you’re a fool to try. And the bastard knows it, so don’t fall for that humble stuff!”

[on Jean Harlow] “She didn’t want to be famous. She wanted to be happy.”

He disliked Greta Garbo, a feeling that was mutual. She thought his acting was wooden while he considered her a snob.

He was seriously considered to play Tarzan in Tarzan the Ape Man (1932), but he was deemed an unknown and Johnny Weissmuller was chosen instead.

“I don’t believe I’m king of anything, but I know why they like to think I am. I’m not much of an actor, but I’m not bad unless it’s one of those things outside my comprehension. I work hard. I’m no Adonis, and I’m as American as the telephone poles I used to climb to make a living. So men don’t get sore if their women folks like me on the screen. I’m one of them, they know it, so it’s a compliment to them. They see me broke, in trouble, scared of things that go bump in the night, but I come out fighting. They see me making love to Jean Harlow or Claudette Colbert and they say, ‘If he can do it, I can do it,’ and figure it’ll be fun to go home and to make love to their wives.”

“I am intrigued by glamorous women… A vain woman is continually taking out a compact to repair her makeup. A glamorous woman knows she doesn’t need to.”

"Hell, if I'd jumped on all the dames I'm supposed to have jumped on, I'd have had no time to go fishing."