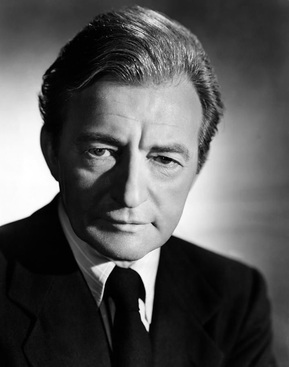 The son of British stage actor Frederick Rains, Claude Rains gave his first theatrical performance at age 11 in Nell of Old Drury. He learned the technical end of the business by working his way up from being a two-dollars-a-week page boy to stage manager. After making his first U.S. appearance in 1913, Rains returned to England, served in the Scottish regiment during WWI, then established himself as a leading actor in the postwar years.

He was also featured in one obscure British silent film, Build Thy House. During the 1920s, Rains was a member of the teaching staff at the Royal Academy of Dramatic Art; among his pupils were a young sprout named Laurence Olivier and a lovely lass named Isabel Jeans, who became the first of Rains’ six wives. While performing with the Theatre Guild in New York in 1932, Rains filmed a screen test for Universal Pictures. On the basis of his voice alone, the actor was engaged by Universal director James Whale to make his talking-picture debut in the title role of The Invisible Man (1933). During his subsequent years at Warner Bros., the mellifluous-voiced Rains became one of the studio’s busiest and most versatile character players, at his best when playing cultured villains.

Though surprisingly never a recipient of an Academy award, Rains was Oscar-nominated for his performances as the “bought” Senator Paine in Mr. Smith Goes to Washington (1939), the title character in Mr. Skeffington (1944), the Nazi husband of Ingrid Bergman in Notorious (1946), and, best of all, the cheerfully corrupt Inspector Renault in Casablanca (1942). In 1946, Rains became one of the first film actors to demand and receive one million dollars for a single picture; the role was Julius Caesar, and the picture Caesar and Cleopatra. He made a triumphant return to Broadway in 1951’s Darkness at Noon. In his last two decades, Claude Rains made occasional forays into television (notably on Alfred Hitchcock Presents) and continued to play choice character roles in big-budget films like Lawrence of Arabia (1962) and The Greatest Story Ever Told (1965).

Available Films:
Trivia:
While filming Notorious (1946) with Alfred Hitchcock and Ingrid Bergman, Hitchcock suggested Rains wear platforms in his shoes as Bergman was very tall. Although embarrassed, Rains agreed to this. One day while Rains was talking to Bergman, Hitchcock came by, lifting Rains’ pant leg and revealing his platforms, commenting “The shame of Rains”.