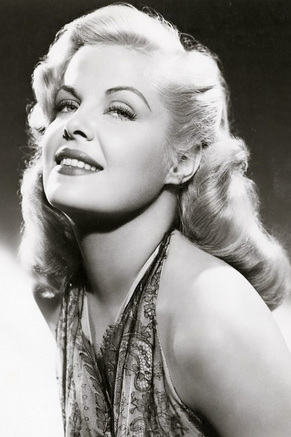 Bleach-blonde leading lady Cleo Moore can be described as Marilyn Monroe without the class. Though very likely a nice person in real life, Moore specialized in playing vulgar, conniving trollops; one could practically smell the cheap perfume whenever she swivelled onscreen. She was spotted by an RKO executive and was convinced to take a screen test. She passed. Her first film was in a rather non-descript film called Congo Bill (1948). After that fiasco, Cleo went back to work at her family’s building business and did some modeling. Two years later, in 1950, the shapely blonde appeared in a Western entitled Rio Grande Patrol (1950). She received fifth billing in the movie that went nowhere.

That year proved to busy for Cleo as she appeared in five other films. In Bright Leaf (1950), a film about the tobacco industry, was a well-received one even though she had only a small part. Gambling House (1950) was, somewhat, of a personal breakthrough. Instead of having, basically, unknowns as her co-stars, Cleo had Victor Mature and William Bendix. Hard as it was to break into films that really grabbed to public’s attention, Cleo seemed to be destined to stay in B movie roles for the balance of her career. Moore became the favorite leading lady of actor/director Hugo Haas, who churned out picture after picture in which he played an older man ruined by Moore’s seductive charms. Retiring from filmmaking in 1957, Cleo Moore entered politics, making an unsuccessful bid for the governor’s chair in her home state of Louisiana.

Available Films:
Trivia:
Was engaged in a long-running personal feud with fellow starlet Anita Ekberg.
Was considered for the role of Miss Caswell in All About Eve (1950), which ultimately went to Marilyn Monroe.

“You know, just because you’re a blonde type doesn’t mean you can’t suddenly do serious parts. I mean, Jane Wyman did a lot of silly parts for years and then all of a sudden went serious and was tremendous. I’m just hoping I don’t get typed for those creature movies - you know, “The Thing from Outer Sputnik” and so on.”