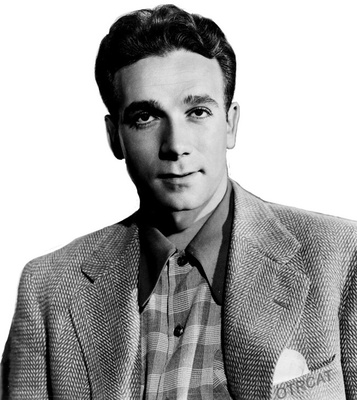 A Brooklynite from head to toe, Dane Clark never completely forsook his streetwise pugnacity, not even while attending Cornell and John Hopkins, and earning a law degree from St. John’s University. Clark held down several Depression-era jobs--road gang worker, boxer, ballplayer, magazine model--before making his first stage appearance in 1938. Four years later, he made his entree into films, at first using his given name of Bernard Zanville (sometimes spelled Zaneville).

Signed by Warner Bros. in 1943, Clark was given a new professional name and purpose in life: as potential replacement for Warners’ resident “tenement tough” John Garfield. Since there was plenty of life left in the original Garfield, however, Clark was largely confined to secondary roles, usually as the hero’s best friend or the cocky troublemaker from Brooklyn. As the 1940s drew to a close, Clark was afforded a few leading roles by Warners, though it was while on loan-out to Republic that he delivered his finest performance, as emotionally overwrought accidental murderer Danny Hawkins in Moonrise (1948).

His film appearances were fewer and farther between in the 1950s, as he sought out more rewarding roles on television and the Broadway stage. He did get to play Harlem Globetrotters maven Abe Saperstein in the 1954 feature Go, Man, Go, but he also had to produce the film himself. On TV, Clark starred as news correspondent Dan Miller on the weekly adventure series Wire Service (1956), and played hotel owner Slate Shannon on the 1959 TV version of the old Bogart-Bacall radio series Bold Venture. He also co-starred as Lt. Tragg on the ill-advised New Perry Mason (1973), and made innumerable guest appearances on such series as Alfred Hitchcock Presents, The Twilight Zone, The Untouchables and Ellery Queen (1975 version).

Available Films:
Trivia:
He had a strong dislike of actor John Garfield. He worked with him in two films and considered him to be extremely arrogant and strongly disagreed with him politically; so much to the point that the only time he and Garfield spoke to one another was in character.

[In 1946, about being signed by Warner Brothers] "That was the best break of my life, hooking up with the Warners. They don't go much for the "pretty boy" type there. An average-looking guy like me has a chance to get someplace, to portray people the way they really are, without any frills."

He was close friends with Glenn Ford and Dick Powell.