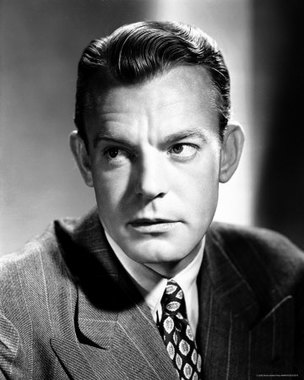 Born Edward Flanagan, O’Keefe was a lithe, brash, charming, tall, rugged lead actor. The son of vaudevillians, he began appearing onstage in his parents’ act while still a toddler. By age 16 he was writing scripts for “Our Gang” comedy shorts. He attended some college and did more work on vaudeville before entering films in the early ‘30s, appearing in bit roles in more than 50 films under the name Bud Flanagan.

He is remembered as being a leading man of Hollywood B films during the 1940s. He moved to California to pursue an acting career, writing film scripts while attending college. In the early 1930s he appeared in numerous films under the name Bud Flanagan, usually as an extra, the first being “Reaching for the Moon” (1930). After a small but impressive role in “Saratoga” (1937), Clark Gable recommended him to Metro-Goldwyn-Mayer (MGM) Studios, and they signed him to a contract later that year, renaming him Dennis O’Keefe. He received bigger film roles after that, starting with “The Bad Man of Brimstone” (1938, with Wallace Beery), and the lead role in “Burn ‘Em Up O’Connor” (1939).

In the 1950s he did some directing and wrote mystery stories and appeared on NBC television’s legal drama series “Justice” as well as “The Martha Raye Show.” From 1957 to 1958, he was the host of NBC television’s mystery drama “Suspicion,” produced by Alfred Hitchcock and from 1959 to 1960, he was the star of the CBS television situation comedy, “The Dennis O’Keefe Show.” His last film appearance was in “Naked Flame” (1964). He was married to actress and dancer Steffi Duna from 1940 until his death. A heavy smoker, he died of lung cancer at the age of 60

Available Films:
Trivia:
Changed his stagename to Dennis O'Keefe from Bud Flanagan in 1937.