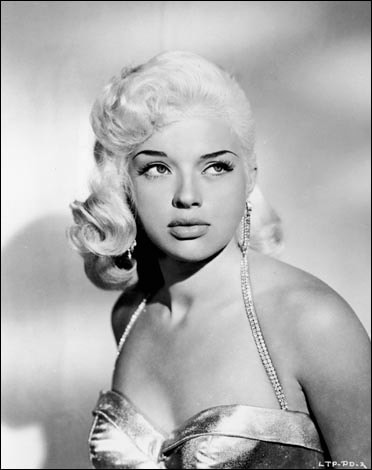 Promoted in the 1950s as “the English Marilyn Monroe,” curvaceous blonde Briton Diana Dors in fact began her screen career long before Marilyn did, and was a far better actress. The daughter of a railroad employee, Diana was a stage performer from adolescence, and in films from the age of 15.

She attended the Royal Academy of Dramatic Art, then rose to film stardom in sexy “party girl” roles. By the mid-1950s, she was permitted a few solid dramatic assignments (Yield to the Night was one of the best) and not a few comedy parts (she was George Gobel’s co-star in RKO’s I Married a Woman). In the late 1960s, Diana continued to be cast in worthwhile supporting roles, notably as the ex-wife of Peter Sellers in There’s a Girl in My Soup (1972), though films like these were outnumbered by such tripe as Swedish Wildcats (1974).

In the years before her death from meningitis, Diana devoted most of her time to religious and charity work. At one time, Diana Dors was the wife of comedian/TV emcee Richard Dawson.

Available Films:
Trivia:
"I’ve played my share of drunken sluts, good time girls, and whores. Being bumped off is really no novelty for me. I’ve been shot, hanged, strangled, gassed, burned to death, and even pushed off a cliff. And for a TV episode of Alfred Hitchcock Presents (1955), I was sawn in half by an electrical buzz saw."