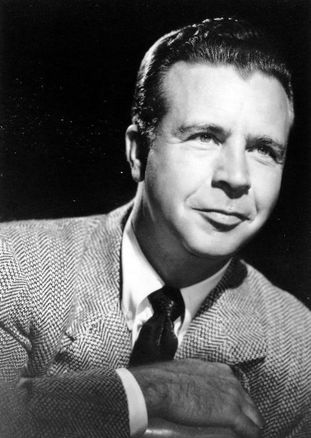 Dick Powell was a musical actor in the 1930s who transitioned into a noir actor in the ‘40s and then a TV producer in the ‘50s.
Born on November 14, 1904, in Arkansas, Dick Powell starred in many of Warner Bros. most renowned musical productions, including 42nd Street and Footlight Parade and Dames. Powell’s transition to film noir roles in the 1940s revamped his career and established him as a multifaceted actor, especially adept at playing tough heroes. Starting in the late 1950s, Powell focused his career on television production and directing.

By 1930, Dick Powell garnered recognition as a traveling entertainer and he became the master of ceremonies at the Stanley Theatre in Pittsburgh. Warner Bros. owned the Pennsylvania theatre and studio executives, aware of his talents, offered Powell a part in the musical Blessed Event (1933). Delighted with his performance, the studio presented him with a long-term contract. Powell starred in many of Warner Bros. most renowned musical productions including 42nd Street (1933), Footlight Parade (1933) and Dames (1934). Powell was also featured in A Midsummer Night’s Dream (1935), in which he starred opposite Olivia de Havilland.

Many of the films, which featured the choreography of Busby Berkeley, paired Powell with actress Ruby Keeler. Powell and Keeler shared a film chemistry and, at the time, were recognized as cinema’s most popular romantic couple. The musical duo made seven films together including Gold Diggers of 1933 and Will Rogers, both produced in 1933, and their last production, Colleen (1936). In 1940, Powell moved on to straight comedy starring in Preston Sturges’s Christmas in July. During the early ‘40s, he took a number of supporting roles in unsuccessful films and, as a result, his career suffered. In 1944, he began to develop his acting skills with a darker range of themes and characters.

His portrayal of private detective Philip Marlowe in the thriller Murder, My Sweet (1944)—an adaptation of the novel Farewell, My Lovely (1940)—earned him critical acclaim. This transition to film noir revived Powell’s struggling career and established him as a multifaceted actor, especially adept at portraying tough heroes. Critics were quick to praise his performances in other noir thrillers such as Cornered (1945) and Pitfall (1948). Powell directed a number of unremarkable films in the 1950s, making his directorial debut with 1953’s Split Second. He also directed The Conqueror (1956), which starred John Wayne and Agnes Moorehead. Powell’s last directorial feats were in the war thrillers The Enemy Below (1957) and The Hunter (1958); both were poorly received by critics and audiences.

Available Films:
Trivia:
He was yet another casualty of the 1956 film The Conqueror (1956) filmed near a nuclear test site in Utah. Many of the people involved with the film, including Powell, who directed, eventually died of cancer, either caused by, or exacerbated by, working on it. Others included actors John Wayne, Susan Hayward, Ted de Corsia, and Agnes Moorehead.

In the 1940s he sold his 55-foot yacht, Santana, to lifelong sailing enthusiast Humphrey Bogart. The vessel subsequently achieved celebrity status as "Bogie's Boat" due to his numerous seafaring expeditions, and Bogart even named his production company, Santana Productions, after it.

"The best thing about switching from being an actor to being a director is that you don't have to shave or hold your stomach in anymore."