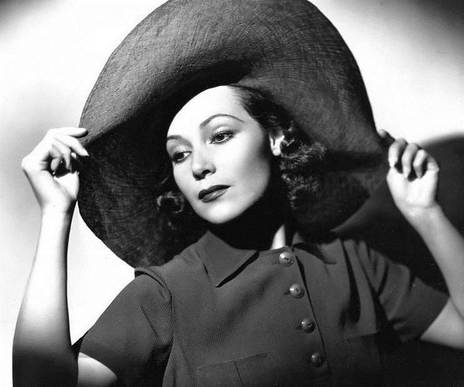 Born into an aristocratic Mexican family, actress Dolores Del Rio was the daughter of a prominent banker. After a convent education, she was married at age 16 to writer Jaime Del Rio, whose name she retained long after the marriage had dissolved. The second cousin of silent film star Ramon Novarro, Del Rio was a regular guest at Hollywood parties; at one of these, director Edwin Carewe, struck by her dazzling beauty, felt she'd be perfect for a role in his upcoming film Joanna (1925).

Stardom followed rapidly, with Del Rio achieving top billing in several major silent productions, including What Price Glory? (1927), as the French coquette Charmaine, and The Loves of Carmen (1927), in the title role. Since Del Rio spoke fluent English, the switch-over to sound posed no problem for her, though her marked Hispanic accent limited her range of roles. Most often, she was cast on the basis of beauty first, talent second; she is at her most alluring in 1932's Bird of Paradise, in which she appears all but nude in some sequences. Del Rio looked equally fetching when fully clothed, as in the title role of Madame Du Barry (1934).

Upon the breakup of her second marriage to art director Cedric Gibbons, the graceful, intelligent Del Rio became the most eligible "bachelor girl" in Hollywood; one of her most ardent suitors was Orson Welles, ten years her junior, who cast her in his 1942 RKO production Journey Into Fear. In 1943, Del Rio returned to Mexico to star in films, negotiating a "percentage of profits" deal which increased her already vast fortune. Enormously popular in her native country, Del Rio returned only occasionally to Hollywood, usually at the request of such long-standing industry friends as director John Ford.

Her seemingly ageless beauty and milk-smooth complexion was the source of envy and speculation; from all accounts, she used no cosmetic surgery, maintaining her looks principally through a diligent (and self-invented) diet and exercise program. Even as late as 1960, she looked far too young to play Elvis Presley's mother in Flaming Star. Del Rio retired from filmmaking in 1978, choosing to devote her time to managing her financial and real estate holdings, and to her lifelong hobbies of writing and painting.

Trivia:
Often referred to as the female Valentino.

Friend of Marlene Dietrich, who thought Dolores "the most beautiful woman in Hollywood".

"Take care of your inner beauty, your spiritual beauty, and that will reflect in your face. We have the face we created over the years. Every bad deed, every bad fault will show on your face. God can give us beauty and genes can give us our features, but whether that beauty remains or changes is determined by our thoughts and deeds."

[on the transition from silent to sound films] "Many big stars didn't survive. Their voices were too high, or they didn't speak English well enough. I survived, but it was difficult. I had to work very, very hard at my English."

"My first beauty rule is to relax completely for 20 minutes each day without interruption-no matter what! I lie flat on the floor and "let go," relaxing completely from the toes up. Consequently, at 5 o clock, when everyone else is tired out I'm full of energy."

"I've never dieted in my life. Don't believe in it. Diets ruin a woman's health and appearance. Her face suffers. She looks drawn and haggard. I eat regular meals and eat anything and everything. Moderation is the key. I may eat cake; but I eat only a small slice."