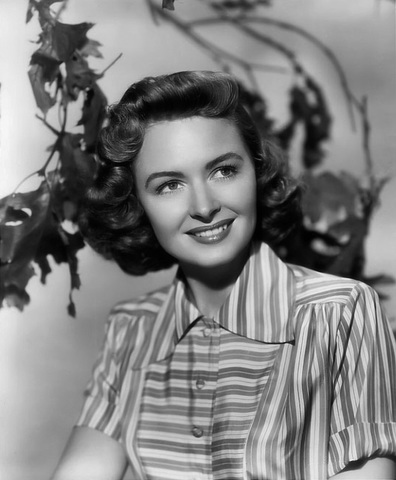 As the star of her own ABC sitcom between 1958 and 1966, Donna Reed epitomized selfless American motherhood, but her crowning achievement had been winning an Academy Award for playing a prostitute. Reed specialized in girl-next-door types after signing with MGM in 1941.

Her role as a courageous Navy nurse in John Ford’s “They Were Expendable” (1945) brought her to the attention of Frank Capra, who paired her with James Stewart in “Itâ¿¿s a Wonderful Life” (1946). Long before it was canonized as a holiday classic, Capra’s paean to small-town American life was written off as a failure, prompting the producers of the baseball biopic “The Stratton Story” (1949) to drop Reed from the cast when Stewart signed on. Reed rebounded with a role in Fred Zinnemann’s “From Here to Eternity” (1953) and took home an Oscar for playing a hooker entangled in a tortured relationship with army private Montgomery Clift.

Disappearing from public life after the cancelation of “The Donna Reed Show,” the actress returned in 1984 to replace Barbara Bel Geddes for a season on the prime time ABC soap opera “Dallas” (1978-1991). Fired a year later with the return of Bel Geddes, Reed won a hefty settlement from the series producers for breach of contract but succumbed to pancreatic cancer early in 1986. The revaluation of “It’s a Wonderful Life” boosted Reed’s posthumous Hollywood stock, drawing new fans to her signature roles and to an appreciation of her unique blend of beauty, intelligence and unflappable poise.

Available Films:
Trivia:
In the scene from It’s a Wonderful Life (1946) where she and James Stewart throw rocks at the old Granville house, director Frank Capra had originally planned to use a double in Donna’s place to throw the rock. Miss Reed, however, was an accomplished baseball player in high school and threw very well, as evidenced by her toss in the movie.

“Forty pictures I was in, and all I remember is ‘What kind of bra will you be wearing today, honey?’ That was always the area of big decision - from the neck to the navel.”