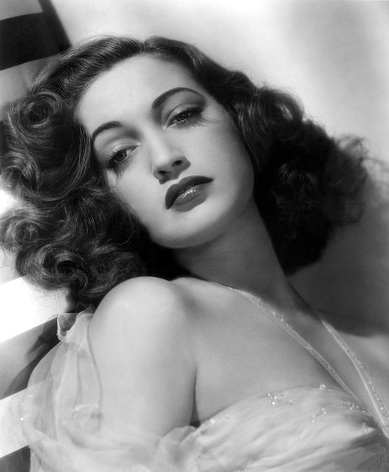 American actress/singer Dorothy Lamour graduated from Spencer Business College, after spending a few teen years as an elevator operator in her home town of New Orleans. By 1930, she’d turned her back on the business world and was performing in the Fanchon and Marco vaudeville troupe. In 1931, she became vocalist for the Herbie Kay Band, and soon afterward married (briefly) Kay. In the years just prior to her film debut, Lamour built up a solid reputation as a radio singer, notably on the 1934 series Dreamer of Songs.

Paramount Pictures signed Lamour to a contract in 1936, creating an exotic southseas image for the young actress: she wore her fabled sarong for the first time in Jungle Princess (1936), the first of three nonsensical but high-grossing “jungle” films in which the ingenuous island girl asked her leading man what a kiss was. A more prestigious “sarong” role came about in Goldwyn’s The Hurricane (1937), wherein Lamour, ever the trouper, withstood tons of water being thrust upon her in the climactic tempest of the film’s title.

Lamour’s latter-day fame was secured in 1940, when she co-starred in Road to Singapore (1940), the first of six “Road” pictures teaming Lamour with Bob Hope and Bing Crosby. It represented both a career summit and a downslide: As the “Road” series progressed, Lamour found herself with fewer and fewer comic lines, and by 1952’s Road to Bali she was little more than a decorative “straight woman” for Bob and Bing. Very popular with the troops during World War II, Lamour gave selflessly of her time and talent in camp tours, USO shows and bond drives throughout the early 1940s. A tough cookie who brooked no nonsense on the set, Lamour was nonetheless much loved by Paramount casts and crews, many of which remained friends even after the studio dropped her contract in the early 1950s.

Occasionally retiring from films during her heyday to devote time to her family, Lamour was out of Hollywood altogether between 1952 and 1962, during which time she developed a popular nightclub act. She returned to films for Hope and Crosby’s Road to Hong Kong (1962), not as leading lady (that assignment was given to Joan Collins) but as a special guest star -- this time she was allowed as many joke lines as her co-stars in her one scene.

Available Films:
Trivia:
John Ford began filming his classic The Hurricane (1937) with Margo in the leading female role, but Samuel Goldwyn halted production and replaced her with Lamour because of the success of The Jungle Princess (1936).

Lamour is named in the film J. Edgar (2011) as having had an early affair with J. Edgar Hoover. Books on Hoover also report that she was his great love, something she never confirmed or denied.

Turned down the role of Crystal Allen in The Women (1939) for she considered the character to be "less then desirable".

[on working with Hope and Crosby] "I felt like a wonderful sandwich, a slice of white bread between two slices of ham."

"I was the happiest and highest-paid straight woman in the business."

[on Bing Crosby] "As I look back, I think he was a very shy, insecure man. The world looked upon him as one of the great talents, he just never saw himself in that light."
Explore the simpler time of yesteryear...
A time when men and women were truly glamorous. A time when you could watch any movie with your children and not have to worry about gratuitous sex or violence – yet enjoy all the lustful inferences and edge-of-your-seat suspense.
Welcome to The Timeless Theater!
We're in the process of identifying which of our films are in the Public Domain, and offering these for sale on DVD.
​Please stay Tuned...!
Check out our new Film Noir Collection:
Coffee Mugs!
Phone Cases!
iPad Cases!
More coming soon!