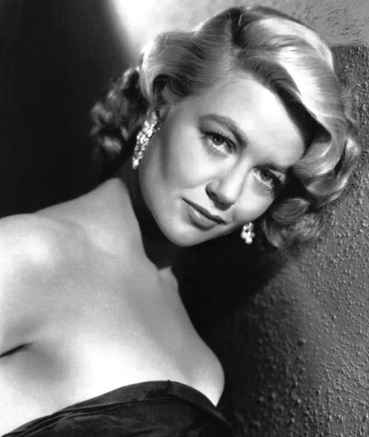 The blonde, sultry, dreamy-eyed beauty of Dorothy Malone, who was born in Chicago, Illinois, took some time before it made an impact with American filmgoing audiences. But once she did, she played it for all it was worth in her one chance Academy Award-winning "bad girl" performance, a role quite unlike the classy and straight-laced lady herself.

Dorothy Eloise Maloney was raised in Dallas, Texas, where her heart and soul remains. She was one of five children born to an accountant father. Two older sisters died of polio. Attending Ursuline Convent and Highland Park High School, she was quite popular (as "School Favorite"). She was also a noted female athlete while there and won several awards for swimming and horseback riding. Following graduation, she studied at Southern Methodist University with the intent of becoming a nurse, but a role in the college play "Starbound" happened to catch the eye of an RKO talent scout and she was offered a Hollywood contract.

The lovely brunette started off in typical RKO starlet mode with acting/singing/dancing/diction lessons and bit parts (billed as Dorothy Maloney) in such films as the Frank Sinatra musicals Higher and Higher (1943) and Step Lively (1944), a couple of the mystery "Falcon" entries and a showier role in Show Business (1944) with Eddie Cantor and George Murphy. RKO lost interest, however, after the two-year contract was up. Warner Bros., however, stepped up to the plate and offered the actress a contract. Now billed as Dorothy Malone, her third film offering with the studio finally injected some adrenalin into her floundering young career when she earned the small role of a seductive book clerk in the Bogart/Bacall classic The Big Sleep (1946). Critics and audiences took notice of her captivating little part. As reward, the studio nudged her up the billing ladder with more visible roles in Two Guys from Texas (1948), Romance on the High Seas (1948), South of St. Louis (1949) and Colorado Territory (1949)_ with the westerns showing off her equestrian prowess if not her acting ability.

Despite this positive movement, Warner Bros. did not extend Dorothy's contract in 1949 and she returned willingly back to her tightly-knit family in Dallas. Taking a steadier job with an insurance agency, she happened to attend a work-related convention in New York City and grew fascinated with the big city. Deciding to recommit to her acting career, she moved to the Big Apple and studied American Theater Wing. In between her studies she managed to find work on TV, which spurred freelancing "B" movie offers in the routine form of Saddle Legion (1951), The Bushwhackers (1951), the Martin & Lewis romp Scared Stiff (1953), Law and Order (1953) Jack Slade (1953), Pushover (1954) and Private Hell 36 (1954).

Things picked up noticeably once Dorothy went platinum blonde which seemed to emphasize her overt and sensual beauty. First off as a sister to Doris Day in Young at Heart (1954), a musical remake of Four Daughters (1938), back at Warner Bros. She garnered even better attention when she appeared in the war pic Battle Cry (1955), in which she shared torrid love scenes with film's newest heartthrob Tab Hunter, and continued the momentum with the reliable westerns Five Guns West (1955) and Tall Man Riding (1955) but not with melodramatic romantic dud Sincerely Yours (1955) which tried to sell to the audiences a heterosexual Liberace.

By this time Dorothy had signed with Universal. Following a few more westerns for good measure (At Gunpoint (1955), Tension at Table Rock (1956) and Pillars of the Sky (1956), Dorothy won the scenery-chewing role of wild, nymphomaniac Marylee Hadley in the Douglas Sirk soap opera meller Written on the Wind (1956) co-starring Rock Hudson, Lauren Bacall and Robert Stack. Both Stack and Malone had the showier roles and completely outshined the two leads, earning supporting Oscar nominations in the process. Stack lost in his category but Dorothy nabbed the trophy for her splendidly tramp, boozed-up Southern belle which was highlighted by her writhing mambo dance.

Unfortunately, Dorothy's long spell of mediocre filming did not end with all the hoopla she received for Written on the Wind (1956). The Tarnished Angels (1957), which reunited Malone with Hudson and Stack faltered, and Quantez (1957) with Fred MacMurray was just another run-of-the-mill oater. Two major film challenges might have changed things with Man of a Thousand Faces (1957)as the unsympathetic first wife of James Cagney's Lon Chaney Sr, and as alcoholic actress Diana Barrymore in the biographic melodrama Too Much, Too Soon (1958). Diana Barrymore. Cagney, however, overshadowed everyone in the first and the second was fatally watered down by the Production Code committee.

To compensate, Dorothy, at age 35, finally married -- to playboy actor Jacques Bergerac, Ginger Rogers' ex-husband, in 1959. A baby daughter, Mimi, was born the following year. Fewer film offers, which included Warlock (1959) and The Last Voyage (1960), came her way as Dorothy focused more on family life. While a second daughter, Diane, was born in 1962, Dorothy and Jacques' turbulent marriage wouldn't lasted and the divorce became final in December of 1964. A bitter custody battle ensued with Dorothy eventually winning primary custody.

It took the small screen to rejuvenate Dorothy's career in the mid-1960s when she earned top billing of TV's first prime time soap opera Peyton Place (1964). Dorothy, starring in Lana Turner's 1957 film role of Constance MacKenzie, found herself in a smash hit. The run wasn't entirely happy however. Doctors discovered blood clots on her lungs which required major surgery and she almost died. Lola Albright filled in until she was able to return. Just as bad, her the significance of her role dwindled with time and 20th Century-Fox finally wrote her and co-star Tim O'Connor off the show in 1968. Dorothy filed a breach of contract lawsuit which ended in an out-of-court settlement.

Her life on- and off-camera did not improve. Dorothy's second marriage to stockbroker Robert Tomarkin in 1969 would last only three months, and a third to businessman Charles Huston Bell managed about three years. Now-matronly roles in the films Winter Kills (1979), Vortex (1982), The Being (1983) and Rest in Pieces (1987), were few and far between a few TV-movies -- which included some "Peyton Place" revivals, did nothing to advance her.

A weary Dorothy returned and settled for good back in Dallas, returning to Hollywood only on occasion. Her last film was a cameo in the popular thriller Basic Instinct (1992) as a friend to Sharon Stone. She will be remembered as one of those Hollywood stars who proved she had the talent but somehow got the short end of the stick when it came to quality films offered.

In 1965, while working on Peyton Place (1964), she suffered a near-fatal illness that included a pulmonary embolism, blood clots on both lungs, an enlarged heart and pneumonia. Upon fully recuperating, she returned to the series after being temporarily replaced by Lola Albright.

She often complained that her character on Peyton Place (1964) was not given enough to do, and that Mia Farrow's character was monopolizing the story lines. She was quoted as saying, "I live much more drama and tragedy in my own life than I ever do on 'Peyton Place'!" She was written out of the show in 1968 and sued 20th Century Fox for breach of contract. The case was settled out of court.