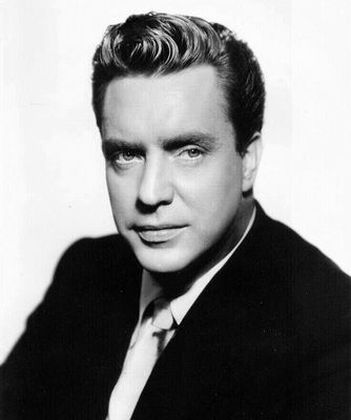 Reportedly a neighbor of Harry Houdini while growing up in the Bronx, American actor Edmond O’Brien decided to emulate Houdini by becoming a magician himself. The demonstrative skills gleaned from this experience enabled O’Brien to move into acting while attending high school. After majoring in drama at Columbia University, he made his first Broadway appearance at age 21 in Daughters of Atrus. O’Brien’s mature features and deep, commanding voice allowed him to play characters far older than himself, and it looked as though he was going to become one of Broadway’s premiere character actors.

Yet when he was signed for film work by RKO in 1939, the studio somehow thought he was potential leading man material -- perhaps as a result of his powerful stage performance as young Marc Antony in Orson Welles’ modern dress version of Julius Caesar. As Gringoire the poet in The Hunchback of Notre Dame (1939), O’Brien was a bit callow and overemphatic, but he did manage to walk off with the heroine (Maureen O’Hara) at the end of the film. Older and stockier when he returned to Hollywood after the war, O’Brien was able to secure meaty leading parts in such “films noir” as The Killers (1946), The Web (1947) and White Heat (1949). In the classic melodrama D.O.A. (1950), O’Brien enjoyed one of the great moments in “noir” history when, as a man dying of poison, he staggered into a police station at the start of the film and gasped “I want to report a murder...mine.”

As one of many top-rank stars of 1954’s The Barefoot Contessa, O’Brien breathed so much credibility into the stock part of a Hollywood press agent that he won an Academy Award. On radio, the actor originated the title role in the long-running insurance-investigator series “Yours Truly, Johnny Dollar” in 1950. On TV, O’Brien played a Broadway star turned private eye in the 1959 syndicated weekly “Johnny Midnight,” though the producers refused to cast him unless he went on a crash vegetarian diet.

Plagued by sporadic illnesses throughout his life, O’Brien suffered a heart seizure in 1961 while on location in the Arabian desert to play the Lowell Thomas counterpart in Lawrence of Arabia, compelling the studio to replace him with Arthur Kennedy. O’Brien recovered sufficiently in 1962 to take the lead in a TV lawyer series, “Sam Benedict;” another TV stint took place three years later in “The Long Hot Summer.” The actor’s career prospered for the next decade, but by 1975 illness had begun to encroach upon his ability to perform; he didn’t yet know it, but he was in the first stages of Alzheimer’s Disease. Edmond O’Brien dropped out of sight completely during the next decade, suffering the ignominity of having his “death” reported by tabloids several times during this period. The real thing mercifully claimed the tragically enfeebled O’Brien in 1985.

Available Films:
Trivia:
At the age of 10 he learned conjuring tricks from his neighbor, Harry Houdini.

O'Brien was originally cast as the photo-journalist Jackson Bentley (based on Lowell Thomas) in Lawrence of Arabia (1962). After O'Brien filmed several scenes, he suffered a heart attack and had to drop out of the picture. He was replaced by Arthur Kennedy.

In an interview, director Don Siegel recalled that during the production of China Venture (1953), he noticed that O'Brien was spending more and more time in his trailer before a scene, and was beginning to arrive late for shooting, which he had never done before. Suspecting that O'Brien might be secretly drinking before he went on camera--an experience Siegel had undergone with several well-known actors he had worked with--the director peeked through the windows of O'Brien's trailer one day and was surprised to see a young man reading O'Brien's lines to him. It turned out that O'Brien's eyesight and memory were beginning to fail him, he didn't want the studio to find out and fire him, so he had his assistant read him his lines and stage directions immediately before he was to shoot a scene so he wouldn't forget them on-camera.

"Versatility is a dangerous thing. It's very satisfying to portray many types of roles, but often your own identity gets lost. Seldom does a producer say, "This is an Eddie O'Brien part." On the other hand, while the rewards may be great in fame and financially for stars, the work becomes monotonous. No actor who plays himself is a happy person."
Explore the simpler time of yesteryear...
A time when men and women were truly glamorous. A time when you could watch any movie with your children and not have to worry about gratuitous sex or violence – yet enjoy all the lustful inferences and edge-of-your-seat suspense.
Welcome to The Timeless Theater!
We're in the process of identifying which of our films are in the Public Domain, and offering these for sale on DVD.
​Please stay Tuned...!
Check out our new Film Noir Collection:
Coffee Mugs!
Phone Cases!
iPad Cases!
More coming soon!