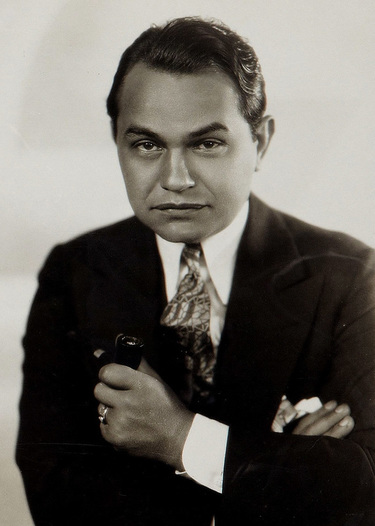 Born Emmanuel Goldenberg, Edward G. Robinson was a stocky, forceful, zesty star of Hollywood films who was best known for his gangsters roles in the ‘30s. A “little giant” of the screen with a pug-dog face, drawling nasal voice, and a snarling expression, he was considered the quintessential tough-guy actor.

He attended the American Academy of Dramatic Arts on a scholarship, and, in 1913, began appearing in summer stock after changing his name to “Edward G.” (for Goldenberg). Robinson debuted on Broadway in 1915, and, over the next 15 years, became a noted stage character actor, even co-writing one of his plays, The Kibitzer (1929). It was a later sound film, 1930’s Little Caesar, that brought him to the attention of American audiences; portraying gangster boss Rico Bandello, he established a prototype for a number of gangster roles he played in the ensuing years.

After being typecast as a gangster he gradually expanded the scope of his roles, and, in the ‘40s, gave memorable “good guy” performances as in a number of psychological dramas; he played federal agents, scientists, Biblical characters, business men, bank clerks, among other characters. The actor experienced a number of personal problems during the ‘50s. He was falsely linked to communist organizations and called before the House Un-American Activities Committee (eventually being cleared of all suspicion). Having owned one of the world’s largest private art collections, he was forced to sell it in 1956 as part of a divorce settlement with his wife of 29 years, actress Gladys Lloyd. Robinson continued his career, however, which now included television work, and he remained a busy actor until shortly before his death from cancer in 1973. His final film was Soylent Green (1973), a science fiction shocker with Charlton Heston. Two months after his death, Robinson was awarded an honorary Oscar “for his outstanding contribution to motion pictures,” having been notified of the honor before he died. He was also the author of a posthumously published autobiography, All My Yesterdays (1973).

Available Films:
Trivia:
Incredibly, never even nominated for an Academy Award. He was awarded a special "Lifetime Achievement" Oscar two months after his death. His wife, who accepted for him, commented on how thrilled he was to learn he would be given the award.

Was originally slated to play Dr. Zaius in Planet of the Apes (1968) but dropped out due to heart problems.

He was considered for the role of Don Vito Corleone in The Godfather (1972) before Marlon Brando was cast.

[on Double Indemnity (1944)] "It was, in fact, the third lead. I debated accepting it. Emanuel Goldberg told me that at my age it was time to begin thinking of character roles, to slide into middle and old age with the same grace as that marvelous actor Lewis Stone . . . The decision made itself . . It remains one of my favorites."

"I remember just before going onto the soundstage, I'd look in my dressing room mirror and stretch myself to my full 5'5" or 5'6"--whatever it was--to make me appear taller and to make me able to dominate all the others and to mow them down with my size."

[on Humphrey Bogart] "I always felt sorry for him--sorry that he had imposed upon himself the character with which he had become identified."