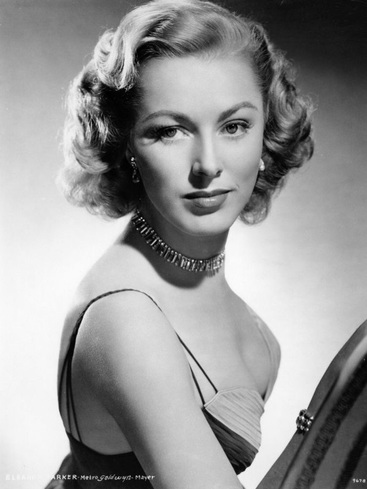 Ohioan Eleanor Parker chose a career in acting when she was still in her teens and began appearing in professional stage productions in Cleveland and at California’s Pasadena Playhouse. Signed at Warner Bros. in 1941, the red-haired actress was given the slow buildup in such B’s as The Mysterious Doctor before graduating to leads in prestige pictures like Pride of the Marines (1945).

As the sluttish Mildred in the 1946 remake Of Human Bondage, Parker was not nearly as effective as Bette Davis in the 1934 version, but she learned from this comparative failure and matured into a versatile actress, equally adept at comedy and heavy dramatics. She was Oscar nominated for Caged (1950), in which she plays an utterly deglamorized prison inmate; Detective Story (1951), wherein, as Kirk Douglas’ wife, she agonizingly harbors the secret of a past abortion; and Interrupted Melody (1955), in which she portrays polio-stricken opera diva Marjorie Lawrence.

Though she tended toward down-to-earth portrayals, Eleanor could be flamboyantly sexy if required, like her performance as a tempestuous lover in Scaramouche. Still regally beautiful into the 1960s and 1970s, Eleanor Parker was always worth watching no matter if the role was thankless (the Countess in Sound of Music [1965]) or “Baby Jane”-style horrific (the terrorized, elderly cripple in Eye of the Cat [1969]). Parker spent the majority of her career in the 1970s and ‘80s in TV movies and the occasional guest appearance on television series like Hawaii Five-O and The Love Boat before retiring from acting in 1991. She died in 2013 at age 91.

Available Films:
Trivia:
Probably best known as the baroness in The Sound of Music (1965).
Was required to have her blonde hair buzzed off to the scalp for her role as a female convict in Caged (1950).
Her favorite actress was Carole Lombard.
Was friends with Andrea King, Lana Turner, and Jane Greer.
Died on her Detective Story (1951) co-star Kirk Douglas' 97th birthday.