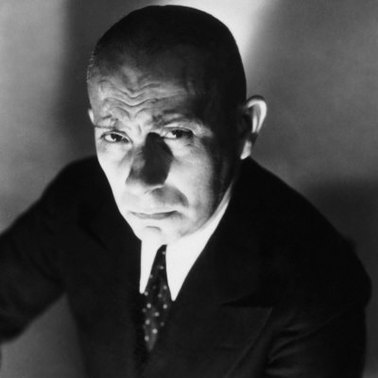 The son of a Jewish hat manufacturer, born in Vienna, Erich Oswald Von Stroheim moved from running his father’s factory to the pinnacle of the Hollywood community as a director, only to fall hard due to his extravagant approach to filmmaking and end up as a peripheral figure. Von Stroheim came to America during the first decade of the twentieth century and supported himself in various jobs before coming to Hollywood in 1914.

He was a bit player in several films, and became a member of D.W. Griffith’s stock company, parlaying his experience as a bit player into a job as assistant director and military advisor (he had served briefly in the Austro-Hungarian Army) -- he moved into greater prominence in 1917 with American entry into World War I, portraying villainous Prussian officers. He moved into the director’s chair at Universal, where he proved a virtual one-man show at first, providing original story, deigning sets, and starring in several of his own films. He quickly showed a talent for translating sexual subject matter -- not yet taboo in Hollywood--onto the screen in ways that were both witty and ostentatious, and his films Blind Husbands, The Devil’s Pass Key, and Foolish Wives, were (and remain) among the most acclaimed sophisticated films of the silent era.

His autocratic manner in dealing with the studio, coupled with his painstaking attention to detail, however, resulted in production schedules of as long as a year on his movies. He left Universal for Goldwyn Films, which was merged into Metro Pictures during the production of Greed, a monumental film whose 42 reels represented a high-water mark in Von Stroheim’s career, but also its effective end--the studio took over the eight hour film and recut it, shortening it to under two hours, and the final release version was condemned by critics and ignored by audiences. He found similar set-backs with The Merry Widow, and he was dismissed from MGM. He directed Queen Kelly (1928), a bizarre story of white slavery and sexual obsession, for its star/producer Gloria Swanson, which proved the effective end of his career when he was fired during production.

He directed Walking Down Broadway (1932-33), which was never released and then settled into character roles. With his bald head and stern visage, Von Stroheim was still a well-known screen presence, and he specialized in complex villainous roles, most notably as the cultured commandant of the P.O.W. camp in Jean Renoir’s Grand Illusion (1937). In 1950, he made what was probably his most important screen appearance as an actor in an American movie, as Gloria Swanson’s fiercely loyal servant in Billy Wilder’s Sunset Boulevard (1950). Although repudiated by Hollywood as a filmmaker, Von Stroheim was honored throughout his life by the European filmmaking community, and in the years after his death his work as a director was rediscovered to fresh appreciation by a new generation, and in the ‘80s Kino International undertook a major restoration and retrospective of Von Stroheim’s silent films. The cut 32 reels of Greed remain among the most speculated upon and sought after lost films in screen history.

Available Films:
Trivia:
As the butler in Sunset Boulevard (1950) he is in the projection room when Norma Desmond and Joe Gillis are watching one of Norma’s old films. The film is actually Queen Kelly (1929), which von Stroehim directed and which starred Gloria Swanson, who is playing Norma Desmond.