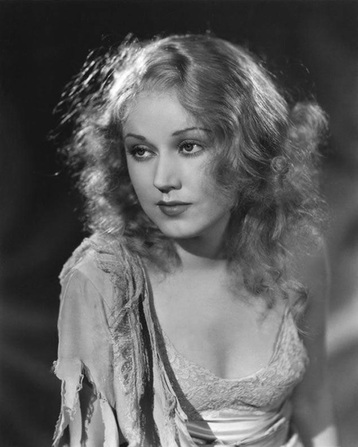 Beginning in 1932, Wray developed into the talkie era’s first “scream queen,” playing the imperiled heroine in five back-to-back horror/fantasy classics. In Doctor X (1932), Vampire Bat (1933) and Mystery of the Wax Museum (1933), she was cast opposite the satanic-featured Lionel Atwill, playing his daughter in the first-named film and his intended victim in the remaining two. In The Most Dangerous Game, Wray and Joel McCrea were hunted down like animals by demented sportsman Leslie Banks. And then came Fay’s opportunity to play opposite “the tallest, darkest leading man in Hollywood”--King Kong (1933). It was in this film that the auburn-haired Wray donned a blonde wig to portray Ann Darrow, the wide-eyed, writhing, screaming object of the Mighty Kong’s affections. While King Kong is the film for which Wray will always be remembered (as late as 1996, she was still making annual pilgrimages to the Empire State Building to commemorate the anniversary of the film’s premiere), it must be noted that she was certainly capable of playing roles with more depth and dimension than Ann Darrow. She was excellent as Gary Cooper’s bitchy ex-flame in One Sunday Afternoon (1933) and as a dim-witted, voracious artist’s model in The Affairs of Cellini (1934). Still, she felt typecast after King Kong, and in 1935 headed for England, hoping to find better film opportunities; instead, it was back to damsels in distress, most notably in the 1935 seriocomic thriller Bulldog Jack.

During her Hollywood heyday, Wray was married to screenwriter John Monk Saunders, but their marriage ended in 1937. After a lengthy romance with playwright Clifford Odets, Wray married again, this time to another screenwriter, Robert Riskin. When Riskin became seriously ill in the late 1940s, Wray retired from acting to care for her invalid husband. She returned before the cameras in 1953, co-starring with Paul Hartman and Natalie Wood in the TV sitcom Pride of the Family. After Riskin’s death in 1955, she made a film comeback in character roles, most memorably as philandering psychiatrist Charles Boyer’s long-suffering wife in The Cobweb (1955). Throughout her acting career, she also kept busy as a writer and musician, and at one point co-wrote a play with no less than Sinclair Lewis. Curtailing her professional activities after her third marriage to a Los Angeles physician, Wray retired after portraying Henry Fonda’s sister in the 1980 TV movie Gideon’s Trumpet. In 1989, Fay Wray published her long-awaited autobiography, an endearingly overwritten tome titled On the Other Hand.

She is regarded as Hollywood's first "scream queen". This was due to the 1932-1933 season when she made the early Technicolor thrillers Doctor X (1932) and Mystery of the Wax Museum (1933) (both at Warner Brothers with Lionel Atwill). She also costarred in The Vampire Bat (1933) at Majestic (again with Atwill) and at RKO she made The Most Dangerous Game (1932) and, of course, King Kong (1933).

For the remake of King Kong (2005), director Peter Jackson wanted Fay to say the closing line of the film. Since she died before it was done, the line went to Jack Black.

[2004, referring to King Kong (1933)] "He [Merian C. Cooper] called me into his office and showed me sketches of jungle scenes and told me, "You're going to have the tallest, darkest leading man in Hollywood." Naturally, I thought Clark Gable. But then he showed me this sketch of a giant ape up the side of the Empire State Building, and he said, "There's your leading man."
Explore the simpler time of yesteryear...
A time when men and women were truly glamorous. A time when you could watch any movie with your children and not have to worry about gratuitous sex or violence – yet enjoy all the lustful inferences and edge-of-your-seat suspense.
Welcome to The Timeless Theater!
We're in the process of identifying which of our films are in the Public Domain, and offering these for sale on DVD.
​Please stay Tuned...!
Check out our new Film Noir Collection:
Coffee Mugs!
Phone Cases!
iPad Cases!
More coming soon!