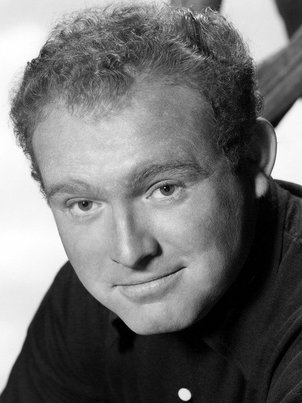 Gene Evans was born in Holbrook, Arizona, on July 11, 1922, and was raised in Colton, California. He served in the Army during World War II as a combat engineer, and was awarded the Purple Heart and the Bronze Star for bravery in action. He began his acting career there, performing in a theatrical troupe of GIs in Europe.

His other major films include Park Row (1952), The Giant Behemoth (1959), Operation Petticoat (1959) and Walking Tall (1973). He became well known in the 1950s on television, playing the father in My Friend Flicka (1955). He remained active in films and television through the 1980s. Evans subsequently retired to a farm near Jackson, Tennessee. He was a popular guest at the Memphis Film Festival for the past decade.

Available Films:
Trivia:
Right after “The Steel Helmet” was finished, Sam Fuller was flush with money. During a Christmas party at his house, invited guest Gene Evans was certain he’d get something valuable. He was initially disappointed though that all he was given was the steel helmet with a bullet hole in it from the movie. Decades later Arthur Knight staged a retrospective of Fuller’s work at USC. Evans was invited to attend as a surprise guest unknown to Fuller. The two old friends had not seen each other for ten or fifteen years at that point. When Evans returned the helmet to Fuller, the director was very touched.and so moved that he couldn’t even talk.
Explore the simpler time of yesteryear...
A time when men and women were truly glamorous. A time when you could watch any movie with your children and not have to worry about gratuitous sex or violence – yet enjoy all the lustful inferences and edge-of-your-seat suspense.
Welcome to The Timeless Theater!
We're in the process of identifying which of our films are in the Public Domain, and offering these for sale on DVD.
​Please stay Tuned...!
Check out our new Film Noir Collection:
Coffee Mugs!
Phone Cases!
iPad Cases!
More coming soon!