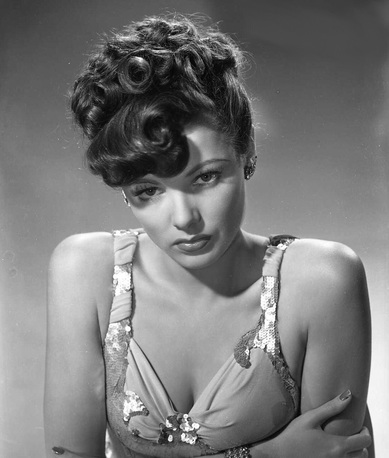 With prominent cheekbones and the most appealing overbite of her day, her striking good looks helped propel her to stardom. Her best known role is the enigmatic murder victim in Laura (1944). She was also Oscar-nominated for Leave Her to Heaven (1945). Her acting performances were few in the 1950s as she battled a troubled emotional life that included hospitalization and shock treatment for depression.

A small role in Hudson’s Bay followed before Tierney essayed her first major role in John Ford’s 1940 drama Tobacco Road. She then starred as the titular Belle Starr. Fox remained impressed with her skills, but critics consistently savaged her work. Inexplicably and wholly inappropriately, she was cast as a native girl in three consecutive features: Sundown, The Shanghai Gesture, and Son of Fury.

Tierney continued working at a steady pace, and in 1946 co-starred with Tyrone Power in an adaptation of the W. Somerset Maugham novel The Razor’s Edge. The 1947 The Ghost and Mrs. Muir was her last major starring role; from 1948’s The Iron Curtain onward, she appeared primarily in smaller supporting performances in projects including the 1949 thriller Whirlpool and Jules Dassin’s classic 1950 noir Night and the City.

The pressures of a failed marriage to Oleg Cassini, the birth of a daughter with learning disabilities in 1943, and several unhappy love affairs resulted in Gene being hospitalized for depression. When she returned to the the screen in Advise & Consent (1962), her acting was as good as ever but there was no longer a big demand for her services. Her last feature film was The Pleasure Seekers (1964), and her final appearance in the film industry was in a TV miniseries, Scruples (1980). Gene died of emphysema in Houston, Texas, on November 6, 1991, just two weeks shy of her 71st birthday.

Available Films:
Trivia:
Her first daughter was born intellectually disabled because Gene had contracted rubella (aka German measles) during her only appearance at the Hollywood Canteen. This served as the uncredited inspiration for the plot of the 1962 Agatha Christie novel and later movie The Mirror Crack’d (1980).

Discovered she was expecting daughter Daria while filming Heaven Can Wait (1943). Began filming Laura (1944), after returning from her maternity leave.
Explore the simpler time of yesteryear...
A time when men and women were truly glamorous. A time when you could watch any movie with your children and not have to worry about gratuitous sex or violence – yet enjoy all the lustful inferences and edge-of-your-seat suspense.
Welcome to The Timeless Theater!
We're in the process of identifying which of our films are in the Public Domain, and offering these for sale on DVD.
​Please stay Tuned...!
Check out our new Film Noir Collection:
Coffee Mugs!
Phone Cases!
iPad Cases!
More coming soon!