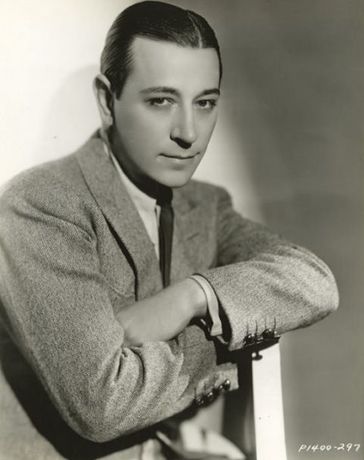 Raft spent his childhood in the tough Hell’s Kitchen area of New York, then left home at 13. He went on to be a prizefighter, ballroom dancer, and taxi-driver, meanwhile maintaining close contacts with New York’s gangster underworld. He eventually made it to Broadway, then went to Hollywood in the late ‘20s.

At first considered a Valentino-like romantic lead, Raft soon discovered his forte in gangster roles. He was the actor most responsible for creating the ‘30s cinema image of gangster-as-hero, particularly after his portrayal of coin-flipping Guido Rinaldo in Scarface (1932). He was highly successful for almost two decades, but then bad casting diminished his popularity.

By the early ‘50s he was acting in European films in a vain attempt to regain critical respect, but he was unsuccessful. He starred in the mid-’50s TV series “I Am the Law,” a failure that seriously hurt his financial status. In 1959 a Havana casino he owned was closed by the Castro government, further damaging his revenues; meanwhile, he owed a great deal to the U.S. government in back taxes. In the mid ‘60s he was denied entry into England (where he managed a high-class gambling club) due to his underworld associations. Most of his film appearances after 1960 were cameos. He was portrayed by Ray Danton in the biopic The George Raft Story (1961).

Available Films:
Trivia:
Was a close friend of notorious gangster Benjamin Bugsy Siegel since their childhood in New York. Siegel actually lived at Raft's home in Hollywood for a time while trying to make inroads for organized crime within the movie colony.

According to James Cagney's autobiography Cagney By Cagney, (Published by Doubleday and Company Inc 1976), a Mafia plan to murder Cagney by dropping a several hundred pound klieg light on top of him was stopped at the insistence of George Raft. Cagney at that time was President of the Screen Actors Guild and was determined not to let the mob infiltrate the industry. Raft used his 'many' mob connections to cancel the hit.

He turned down the roles of Roy "Mad Dog" Earle in "High Sierra (1941)", Sam Spade in "The Maltese Falcon (1941)", and Rick Blaine in "Casablanca (1942)." All three of these parts were picked up by Humphrey Bogart, and each one was essential in making Bogart a superstar.

During the late-1950s, Raft was employed as a celebrity greeter at the Mafia-owned Hotel Capri casino in Havana, a job that played off his image as a movie mobster and tough guy. He was present on January 1, 1959 when rebels stormed Havana, overthrowing dictator Fulgencio Batista. According to Raft, as the rebels began looting the Capri, they recognized him and he was able to convince them not to hurt anyone.

"I must have gone through $10 million during my career. Part of the loot went for gambling, part for horses and part for women. The rest I spent foolishly."

[on turning down the leading part in one of Hollywood's greatest dramas] "Whoever heard of Casablanca? I don't want to star opposite an unknown Swedish broad."
Explore the simpler time of yesteryear...
A time when men and women were truly glamorous. A time when you could watch any movie with your children and not have to worry about gratuitous sex or violence – yet enjoy all the lustful inferences and edge-of-your-seat suspense.
Welcome to The Timeless Theater!
We're in the process of identifying which of our films are in the Public Domain, and offering these for sale on DVD.
​Please stay Tuned...!
Check out our new Film Noir Collection:
Coffee Mugs!
Phone Cases!
iPad Cases!
More coming soon!