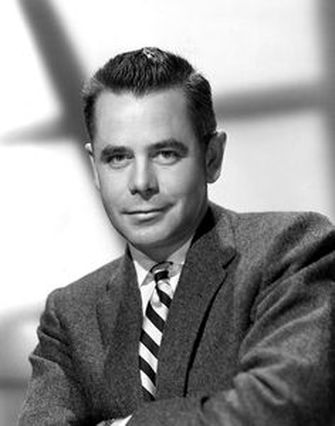 The son of a Canadian railroad executive, Glenn Ford first toddled on-stage at age four in a community production of Tom Thumb’s Wedding. In 1924, Ford’s family moved to California, where he was active in high-school theatricals. He landed his first professional theater job as a stage manager in 1934, and, within a year, he was acting in the West Coast company of Lillian Hellman’s The Children’s Hour. Although he made his film debut in 20th Century Fox’s Heaven With a Barbed Wire Fence (1939), Ford was signed by Columbia, which remained his home base for the next 14 years. After an apprenticeship in such B-movies as Blondie Plays Cupid (1940), Ford was promoted to Columbia’s A-list.

Ford made his official debut in Fox’s Heaven with a Barbed Wire Fence (1939), and continued working in various small roles throughout the 1940s until his movie career was interrupted to join the Marines in World War II. Ford continued his military career in the Naval Reserve well into the Vietnam War, achieving the rank of captain. In 1943 Ford married legendary tap dancer Eleanor Powell, and had one son, Peter Ford. Like many actors returning to Hollywood after the war (including James Stewart and Holden (who had already acquired a serious alcohol problem), he found it initially difficult to regain his career momentum. He was able to resume his movie career with the help of Bette Davis, who gave him his first postwar break in the 1946 movie A Stolen Life (1946).

However, it was not until his acclaimed performance in a 1946 classic film noir, Gilda (1946), with Rita Hayworth, that he became a major star and one of the the most popular actors of his time. He scored big with the film noir classics The Big Heat (1953) and Blackboard Jungle (1955), and was usually been cast as a calm and collected everyday-hero, showing courage under pressure. Ford continued to make many notable films during his prestigious 50-year movie career, but he is best known for his fine westerns such as 3:10 to Yuma (1957) and The Rounders (1965). Ford pulled a hugely entertaining turn in The Sheepman (1958) and many more fine films. In the 1970s, Ford made his television debut in the controversial The Brotherhood of the Bell (1970) and appeared in two fondly remembered television series: Cade’s County (1971) and The Family Holvak (1975). During the 1980s and 1990s, Ford limited his appearance to documentaries and occasional films, including a nice cameo in Superman (1978).

Available Films:
Trivia:
Often during his career Ford insisted on being shot looking to camera left - he had been kicked in the right side of his jaw by a horse and insisted the left side of his face was his only filmable side.

Ford had intended to portray Hondo Lane in Hondo (1953), but backed out when John Farrow was chosen to direct. Ford and Farrow did not got along while making Plunder of the Sun (1953), causing Ford to lose interest in the role. The role was subsequently portrayed by John Wayne.

He was a close friend of William Holden.

"Some actors count their lines as soon as they receive a script. I'm the opposite. I try to see how many lines I can whittle down...You can say just as much in 4 as you can in 14."