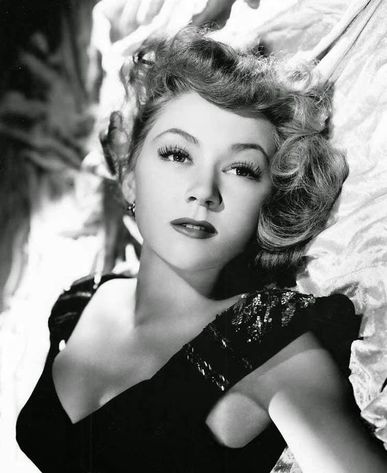 Gloria Hallward, an acting pupil of her mother (stage actress and teacher Jean Grahame), acted professionally while still in high school. In 1944 Louis B. Mayer saw her on Broadway and gave her an MGM contract under the name Gloria Grahame. Her debut in the title role of Blonde Fever (1944) was auspicious, but her first public recognition came on loan-out in It’s a Wonderful Life (1946). Though her talent and sex appeal were of star quality, she did not fit the star pattern at MGM, who sold her contract to RKO in 1947. Here the same problem resurfaced; her best film in these years was made on loan-out, In a Lonely Place (1950). Soon after, she left RKO. The 1950s, her best period, brought Gloria a supporting actress Oscar and typecast her as shady, inimitably sultry ladies in seven well-known film-noir classics. Rumors of being difficult to work with on the set of Oklahoma! (1955) sidelined her film career from 1956 onward. She also suffered from marital and child-custody troubles.

For her portrayal of a somewhat classy tart in The Bad and the Beautiful (1952), Grahame won a “Best Supporting Actress” Oscar. Until the mid-’50s she landed a number of excellent roles, but her career gradually diminished and she retired from the screen in the late ‘50s. Years later she returned to play character roles, mostly in low-budget films. She married and divorced actor Stanley Clements, director Nicholas Ray, and writer Cy Howard; later she raised eyebrows by marrying Nicholas Ray’s son (her former step-son), actor-producer Tony Ray. Gloria Grahame spent her last days working on the stage in England while battling cancer.

Reportedly did not get on with Humphrey Bogart during the filming of In a Lonely Place (1950) as Bogart had campaigned for the part of Laurel Gray to be given to his wife Lauren Bacall, which was instead given to Grahame.

Unhappy with the tilt of her upper lip, she often stuffed cotton along her gumline to straighten it out. The effect was cosmetically less than flattering and made it difficult for her to speak. A leading man, after kissing her, ended up with a mouth full of cotton.

"I married Nicholas Ray, the director. People yawned. Later on I married his son, and from the press's reaction you'd have thought I was committing incest or robbing the cradle!"
Explore the simpler time of yesteryear...
A time when men and women were truly glamorous. A time when you could watch any movie with your children and not have to worry about gratuitous sex or violence – yet enjoy all the lustful inferences and edge-of-your-seat suspense.
Welcome to The Timeless Theater!
We're in the process of identifying which of our films are in the Public Domain, and offering these for sale on DVD.
​Please stay Tuned...!
Check out our new Film Noir Collection:
Coffee Mugs!
Phone Cases!
iPad Cases!
More coming soon!