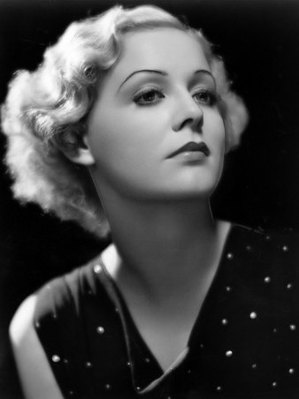 Blonde, serene-looking film actress Gloria Stuart forsook her stage career when she was signed to two separate movie contracts in 1932. It took a court arbitrator to determine which studio would be permitted to make use of Stuart’s services, Paramount or Universal. Universal won, and soon the actress was starring in such memorable films as James Whale’s The Old Dark House (1932) and The Invisible Man (1933).

From 1936 on, Stuart, who was born in Santa Monica, CA, on July 4, 1910, was contracted to 20th Century Fox, where among many other films she appeared in John Ford’s Prisoner of Shark Island (1936), the Shirley Temple vehicle Rebecca of Sunnybrook Farm (1938), and the Ritz Brothers version of The Three Musketeers (1939). Gradually retiring from films in the early ‘40s to return to her stage origins, Stuart subsequently decided to devote her time to her second husband, screenwriter/wit Arthur Sheekman, whom she had married in 1934. She became an accomplished painter, staging several one-woman exhibits in New York, Austria, and Italy during the 1960s.

In 1982, Stuart made a long-overdue return to the screen in the cameo role of Peter O’Toole’s matronly dancing partner in My Favorite Year. Sixteen years later, she became known to a whole new generation of fans when she starred as 100-year-old Rose DeWitt, the heroine of James Cameron’s Titanic. The only member of Titanic’s cast and crew to have been alive at the time of the actual catastrophe, Stuart, who was 88 when the film was released, made history with her performance in the record-breaking movie. Nominated for an Oscar in the Best Supporting Actress category, she became the oldest person in history to be nominated for an Academy Award; in addition to various other award nominations, she won a Best Supporting Actress prize from the Screen Actors Guild, an organization she had helped to found in 1933. Thanks to Titanic, Stuart enjoyed a late-life career renaissance, and was soon appearing in magazines (People dubbed her one of the “50 Most Beautiful People in the World”), Hanson videos, and, most importantly, in new films that ranged from the romantic comedy The Love Letter (1999) to Wim Wenders’ The Million Dollar Hotel (2000).

Available Films:
Trivia:
In Gold Diggers of 1935 (1935), Stuart played a young woman whose mother pushes her to marry an unlikable rich man, but the young woman falls in love with a poor man. In Titanic (1997), Stuart’s character did the very same thing 84 years earlier. She was the only cast member of Titanic (1997) who was alive at the time of the actual disaster. Stuart lived to be 100 years old, the same age as her character in the film.
Explore the simpler time of yesteryear...
A time when men and women were truly glamorous. A time when you could watch any movie with your children and not have to worry about gratuitous sex or violence – yet enjoy all the lustful inferences and edge-of-your-seat suspense.
Welcome to The Timeless Theater!
We're in the process of identifying which of our films are in the Public Domain, and offering these for sale on DVD.
​Please stay Tuned...!
Check out our new Film Noir Collection:
Coffee Mugs!
Phone Cases!
iPad Cases!
More coming soon!