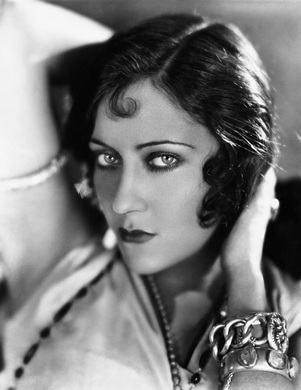 Gloria Swanson may not have been the world’s best actress, but she was certainly one of the screen’s greatest personalities. The daughter of a peripatetic army officer, she was educated in public schools from Chicago to Puerto Rico. While visiting Chicago’s Essanay studios in 1913, the 15-year-old Swanson was hired as an extra and it was in this capacity that she met her first husband, Wallace Beery, then starred in the studio’s Sweedie comedies. Not long after making a brief appearance in Charlie Chaplin’s first Essanay starrer His New Job (1915), she accompanied her husband to Hollywood, where he’d been signed by Mack Sennett’s Keystone studios.

Often teamed with diminutive leading man Bobby Vernon, Swanson earned a measure of fame as the deadpan heroine of such comedies as Teddy at the Throttle (1916) and The Pullman Bride (1916) (she later claimed that she had no sense of humor at the time and thus played her roles seriously, which made them all the funnier to the audience). Divorced from Beery in 1917, Swanson also left Keystone that same year to accept an offer to appear in dramatic roles for Triangle Pictures. She then went to work for Cecil B. DeMille, who admired her courage and tenacity and cast her as the glamorously (and provocatively) garbed heroines of such lavish productions as Don’t Change Your Husband (1918), Male and Female (1919), and The Affairs of Anatol (1920). A full-fledged superstar by the early ‘20s, Swanson carefully controlled every aspect of her career, from choosing her leading men and directors to approving her publicity layouts. She also remained in the public eye via her succession of high-profile husbands, including the Marquis de la Falaise de Coudray. Though at her best in tear-stained romantic dramas, she could still deliver a top-notch comedy performance, as witness her portrayal of a dowdy, gum-chewing working girl in Allan Dwan’s Manhandled (1924). In the late ‘20s she set up her own production company with the sponsorship of her then-lover, financier Joseph P. Kennedy.

After a successful start with 1928’s Miss Sadie Thompson, Swanson’s company went bankrupt as a result of her benighted association with the Erich Von Stroheim-directed fiasco Queen Kelly (1929). Contrary to popular belief, she made a successful transition to sound, displaying her fine singing voice in films like Tonight or Never (1931) and Music in the Air (1934). But the public had adopted new favorites and no longer flocked to Swanson’s films as they once had. She retired in the mid-’30s, briefly returning in 1941 to star with Adolphe Menjou in the undistinguished comedy Father Takes a Wife. Her next film appearance in 1949 turned out to be one of the finest achievements in anybody’s career: Her Oscar-nominated virtuoso performance as faded, self-delusional silent screen star Norma Desmond in Billy Wilder’s vitriolic Hollywood melodrama Sunset Boulevard. So convincing was Swanson in this role that many of her fans believed that she was Norma Desmond, though nothing could have been further from the truth. Unfortunately, her attempts to follow up this triumph proved unsuccessful, prompting her to turn her back on filmmaking for the third time in her career.

Underwent an abortion in 1917 during her marriage to Wallace Beery. Swanson called it one of the biggest regrets of her life.

"I have decided that when I am a star, I will be every inch and every moment a star."

"It's amazing to find that so many people, who I thought really knew me, could have thought that Sunset Boulevard (1950) was autobiographical. I've got nobody floating in my swimming pool."

[on Marlene Dietrich] "Her legs may be longer than mine, but unlike me, she doesn't have 7 grandchildren."
Explore the simpler time of yesteryear...
A time when men and women were truly glamorous. A time when you could watch any movie with your children and not have to worry about gratuitous sex or violence – yet enjoy all the lustful inferences and edge-of-your-seat suspense.
Welcome to The Timeless Theater!
We're in the process of identifying which of our films are in the Public Domain, and offering these for sale on DVD.
​Please stay Tuned...!
Check out our new Film Noir Collection:
Coffee Mugs!
Phone Cases!
iPad Cases!
More coming soon!