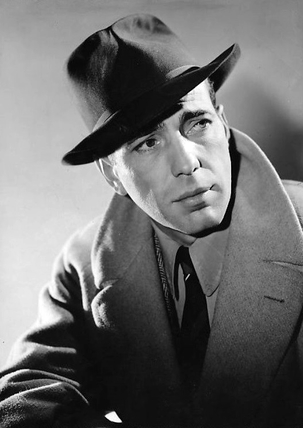 The quintessential tough guy, Humphrey Bogart remains one of Hollywood’s most enduring legends and one of the most beloved stars of all time. While a major celebrity during his own lifetime, Bogart’s appeal has grown almost exponentially in the years following his death, and his inimitable onscreen persona -- hard-bitten, cynical, and enigmatic -- continues to cast a monumental shadow over the motion picture landscape. Sensitive yet masculine, cavalier yet heroic, his ambiguities and contradictions combined to create a larger-than-life image which remains the archetype of the contemporary antihero.

Humphrey DeForest Bogart was born December 25, 1899, in New York City. Upon expulsion from Andover, Massachusetts’ Phillips Academy, he joined the U.S. Navy during World War I, serving as a ship’s gunner. While roughhousing on the vessel’s wooden stairway, he tripped and fell, a splinter becoming lodged in his upper lip; the result was a scar as well as partial paralysis of the lip, resulting in the tight-set mouth and lisp that became among his most distinctive onscreen qualities. (For years his injuries were attributed to wounds suffered in battle, although the splinter story is now more commonly accepted.)

He made his first film appearance opposite Helen Hayes in the 1928 short The Dancing Town, followed by the 1930 feature Up the River, which cast him as a hard-bitten prisoner. Warner Bros. soon signed him to a $550-dollars-a-week contract, and over the next five years he appeared in dozens of motion pictures, emerging as the perfect heavy in films like 1936’s The Petrified Forest, 1937’s Dead End, and 1939’s The Roaring Twenties.

Available Films:
Trivia:
Almost all of the roles that made him a star (after a decade of toiling in minor films) were roles he got because George Raft had turned them down, from High Sierra (1941), in which Bogie was first noticed as a viable box office draw, to Casablanca (1942), which made him a true international star. Ironically, after having been overshadowed by Raft the whole first half of his career, Bogart remains a legend while Raft is all-but-forgotten.
Explore the simpler time of yesteryear...
A time when men and women were truly glamorous. A time when you could watch any movie with your children and not have to worry about gratuitous sex or violence – yet enjoy all the lustful inferences and edge-of-your-seat suspense.
Welcome to The Timeless Theater!
We're in the process of identifying which of our films are in the Public Domain, and offering these for sale on DVD.
​Please stay Tuned...!
Check out our new Film Noir Collection:
Coffee Mugs!
Phone Cases!
iPad Cases!
More coming soon!