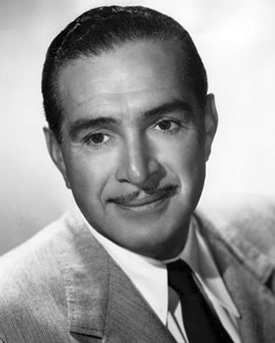 Though descended from a highly respected family of Irish politicians and civil servants, actor J. Carroll Naish played every sort of nationality except Irish during his long career. Naish joined the Navy at age sixteen, and spent the next decade travelling all over the world, absorbing the languages, dialects and customs of several nations. Drifting from job to job while stranded in California, Naish began picking up extra work in Hollywood films.

The acting bug took hold, and Naish made his stage debut in a 1926 touring company of The Shanghai Gesture. Within five years he was a well-established member of the theatrical community (the legendary actress Mrs. Leslie Carter was the godmother of Naish’s daughter). Naish thrived during the early days of talking pictures thanks to his expertise in a limitless variety of foreign dialects. At various times he was seen as Chinese, Japanese, a Frenchman, a South Seas Islander, Portuguese, an Italian, a German, and a Native American (he played Sitting Bull in the 1954 film of the same name).

Many of his assignments were villainous in nature (he was a gangster boss in virtually every Paramount “B” of the late 1930s), though his two Oscar nominations were for sympathetic roles: the tragic Italian POW in Sahara (1943) and the indigent Mexican father of a deceased war hero in A Medal For Benny (1954). Naish continued to flourish on radio and television, at one point playing both a priest and a rabbi on the same anthology series. He starred in both the radio and TV versions of the melting-pot sitcom “Life with Luigi,” essayed the title role in 39 episodes of “The New Adventures of Charlie Chan” (1957), and played a comedy Indian on the 1960 sitcom “Guestward Ho.” Illness forced him to retire in 1969, but J. Carroll Naish was cajoled back before the cameras by quickie producer Al Adamson for the 1970 ultracheapie Dracula vs. Frankenstein; even weighed down by bad false teeth, coke-bottle glasses and a wheelchair, Naish managed to act the rest of the cast right off the screen.