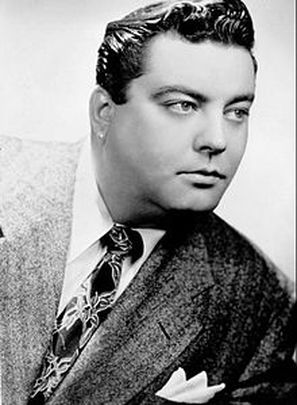 Rotund comedian-actor Jackie Gleason (born Herbert John Gleason) broke into show business at age 15 by winning an amateur-night contest and went on to perform in vaudeville, carnivals, nightclubs, and roadhouses. In 1940 he was signed to a film contract by Warner Bros., and he debuted onscreen in Navy Blues (1941). His career was interrupted by World War II, but at the war’s end, Gleason returned to Hollywood, this time playing character roles in a number of films.

His film work, however, lent little strength to his career, and he performed in several Broadway shows before achieving major success as the star of such TV comedy series as The Life of Riley, The Honeymooners, and The Jackie Gleason Show. It was during his reign on television that Gleason created such enduring characters as Ralph Kramden (the loud-mouth busdriver from The Honeymooners), Reggie Van Gleason, and Joe the Bartender. As a result of the comedic talents he displayed on TV, he became known as “The Great One.” Gleason returned to films in the early ‘60s in lead roles, both comic and dramatic (he earned an Academy Award nomination for his performance in The Hustler [1961]), but he never had as much success in movies as he did on TV. He did have some success in the late ‘70s and early ‘80s playing a good-ole’-boy Southern sheriff in the Smokey and the Bandit series of action-comedies. His long career also included a period when he composed, arranged, and conducted recordings of mood music. Gleason died in 1987 of cancer. His grandson is actor Jason Patric.

Available Films:
Trivia:
Once said that Orson Welles bestowed his “The Great One” nickname upon him.

He was not only a boxer and carnival barker in his early years, but also a pool hustler. Interestingly, he went on to play Minnesota Fats in The Hustler (1961) with Paul Newman.

The popular Hanna-Barbera character Fred Flintstone was based on him, as the Flintstones animated series was loosely based on the Honeymooners. Upon realizing this, Gleason tried to file a lawsuit against Hanna-Barbera but was dissuaded from doing so by friends and colleagues who advised him that it would be bad for his reputation if he became known as “the man who killed Fred Flintstone.”.
Explore the simpler time of yesteryear...
A time when men and women were truly glamorous. A time when you could watch any movie with your children and not have to worry about gratuitous sex or violence – yet enjoy all the lustful inferences and edge-of-your-seat suspense.
Welcome to The Timeless Theater!
We're in the process of identifying which of our films are in the Public Domain, and offering these for sale on DVD.
​Please stay Tuned...!
Check out our new Film Noir Collection:
Coffee Mugs!
Phone Cases!
iPad Cases!
More coming soon!