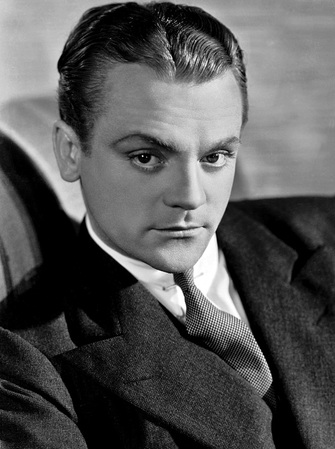 With his raspy voice, and staccato vocal inflections James Cagney was one of the brightest stars in American cinema history. The son of an Irish father and a Norwegian mother who lived and worked in New York’s Lower Eastside, Cagney did a variety of odd jobs to help support his family, including working as a waiter, and a poolroom racker, and even a female impersonator in a Yorkville revue. This humble beginning led to joining the chorus in the Broadway show Pitter-Patter, followed by a vaudeville tour with his wife Francis. By 1925, Cagney had begun to play Broadway leads; he was particularly successful in the musical Penny Arcade, which lead him to be cast in the Hollywood version, renamed Sinner’s Holiday (1930). Within a year, Cagney had been signed by Warner Bros., where, in his fifth movie role, he played the ruthless gangster in Public Enemy, the 1931 film that made him a star.

Cagney was a small, rather plain looking man, and had few of the external qualities usually associated with the traditional Hollywood leading man during the ‘30s. Yet, inside, he was a dynamo, able to project a contentious and arrogant confidence that made him the ideal Hollywood tough guy, the role in which he is best remembered. Of Cagney’s energetic acting style, Will Rogers once said, “Every time I see him work, it looks to me like a bunch of firecrackers going off all at once.” But Cagney was not content to simply play one type of role, and soon proved his range and versatility by appearing in musicals (Yankee Doodle Dandy [1942], for which he won an Oscar for his portrayal of George M. Cohen); Shakespearean drama (as Bottom in A Midsummer Night’s Dream [1935]); and satire (as a gung-ho American businessman in One, Two, Three[1961]).

Cagney even tried directing with Short Cut to Hell a remake of This Gun for Hire, but it was not a commercial success. He retired afterward -- publishing his autobiography, Cagney by Cagney in 1975 -- although continued to receive respect and adulation from his peers and the public. Fifteen years after retiring, Cagney was the first actor to receive the American Film Institute’s Life Achievement Award. In 1980, he earned a similar award from Kennedy Center. And, in 1984, he received the U.S. government’s highest civilian honor, the Medal of Freedom.

Trivia:
Often left the set early claiming he was too ill to continue filming in order to ensure an extra day of filming so that the extras and the film crew, whom he thought woefully underpaid, could get an additional day’s salary.

[about The Public Enemy (1931)] “What not many people know is that right up to two days before shooting started, I was going to play the good guy, the pal. Edward Woods played it in the end.”
Explore the simpler time of yesteryear...
A time when men and women were truly glamorous. A time when you could watch any movie with your children and not have to worry about gratuitous sex or violence – yet enjoy all the lustful inferences and edge-of-your-seat suspense.
Welcome to The Timeless Theater!
We're in the process of identifying which of our films are in the Public Domain, and offering these for sale on DVD.
​Please stay Tuned...!
Check out our new Film Noir Collection:
Coffee Mugs!
Phone Cases!
iPad Cases!
More coming soon!