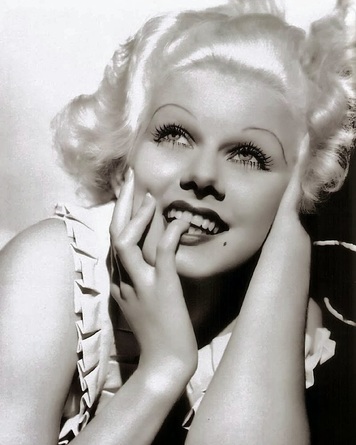 Jean Harlow, with her soft come-hither body, platinum blonde hair, and keen sense of humor, is recognized as one of the most gifted and blatantly sensual stars of the 1930s. Harlow endured much pain during her 26 years. Born Harlean Carpenter in Kansas City, she was the daughter of Jean Harlow Carpenter (whose name the actress appropriated for the marquee), the complex, often oppressive force behind her daughter's sudden rise to fame. When she was only 16, the young Harlow eloped with a businessman and moved to Los Angeles, where she began appearing as an extra in silent films.

She was particularly noticed for her appearance in a 1929 Laurel and Hardy short Double Whoopee. That year she also played a small role opposite reigning sex symbol Clara Bow in The Saturday Night Kid. In 1930, Harlow got her first real break from Howard Hughes, who cast her in his World War I drama Hell's Angels after he found the film's original star Greta Nissen's Swedish accent incomprehensibly thick. It was in this film that she uttered the immortal words "Would you be shocked if I changed into something more comfortable?" Harlow's wise-cracking presence in the film soon attracted much attention, and Hughes sent her out on a publicity tour and loaned her to other studios. In 1931 she appeared in six films; while her performances were often panned by critics and audiences were initially shocked by her almost lurid onscreen sexuality, she gradually began to develop a following.

She achieved real fame in 1932 when MGM bought her contract and decided to give her more substantial parts. In films such as Red-Headed Woman and Red Dust (both 1932) Harlow demonstrated that she was not only extremely sexy and funny, she was also a first-rate actress; by the year's end she was a bonafide star playing opposite some of the industry's most popular men, including Clark Gable and Spencer Tracy. Unfortunately, as her professional career flourished, her personal life began to deteriorate, beginning with the alleged suicide of her second husband Paul Bern. Though there was a subsequent scandal surrounding his demise, it did not impact Harlow's popularity. Later she ended up briefly married to cinematographer Harold Rosson, and then had a long engagement with MGM star William Powell. While filming Saratoga in 1937, Harlow suddenly fell ill; ten days later, on June 7, she died at age 26. During her reign, Harlow had starred in less than twenty films. At the time of her death, no details as to why she died were released, but several years later it was revealed that Harlow had suffered from kidney disease most of her life, and that she died of acute uremic poisoning. Her life has been chronicled in several biographies and two subsequent movies, both named Harlow.

Dated the notorious mobster Abner "Longy" Zwillman, who secured a two-picture deal for Harlow with Harry Cohn of Columbia Pictures by loaning Cohn $500,000 in cash. He also purchased her a jeweled charm bracelet and a red Cadillac.

She used to put ice on her nipples right before shooting a scene in order to appear sexier.

Was the idol of Marilyn Monroe, who backed out of a biographical picture on her life. After reading the script, Monroe reportedly told her agent, "I hope they don't do that to me after I'm gone." Both Harlow and Monroe co-starred in their last films with Clark Gable, Harlow in Saratoga (1937) and Monroe in The Misfits (1961).

Had two famous superstitions: She always wore a lucky ankle chain on her left leg, which is visible in some films if you look closely, and had a lucky mirror in her dressing room. She would not leave the room without first looking in it.

“I’m not a great actress, and I never thought I was. But I happen to have something the public likes.”

“I was not a born actress. No one knows it better than I. If I had any talent, I have had to work hard, listen carefully, do things over and over and then over again in order to bring it out.”
Explore the simpler time of yesteryear...
A time when men and women were truly glamorous. A time when you could watch any movie with your children and not have to worry about gratuitous sex or violence – yet enjoy all the lustful inferences and edge-of-your-seat suspense.
Welcome to The Timeless Theater!
We're in the process of identifying which of our films are in the Public Domain, and offering these for sale on DVD.
​Please stay Tuned...!
Check out our new Film Noir Collection:
Coffee Mugs!
Phone Cases!
iPad Cases!
More coming soon!