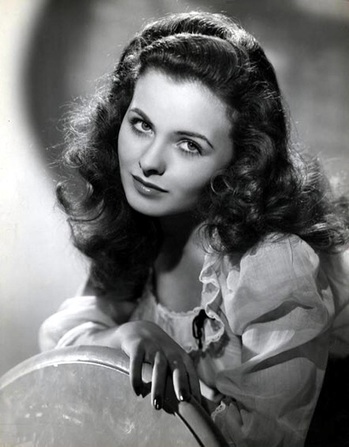 Jeanne Crain was born in Barstow, California, on May 25, 1925. The daughter of a high school English teacher and his wife, Jeanne was moved to Los Angeles not long after her birth after her father got another teaching position in that city. While in junior high school, Jeanne played the lead in a school production which set her on the path to acting. When she was in high school Jeanne was asked to take a screen test to appear in a film by Orson Welles. Unfortunately, she didn't get the part, but it did set her sights on being a movie actress.

After her high school career, Jeanne enrolled at UCLA to study drama. At the age of 18, Jeanne won a bit part in Fox Studio's film entitled The Gang's All Here (1943) and a small contract. Her next film saw Jeanne elevated to a more substantial part in Home in Indiana (1944) the following year, which was filmed in neighboring Kentucky. The movie was an unquestionable hit. On the strength of that box-office success, Jeanne was given a raise and star billing, as Maggie Preston, in the next film of 1944, In the Meantime, Darling (1944). Unfortunately, the critics not only roasted the film, but singled out Jeanne's performance in particular. She rebounded nicely in her last film of the year, Winged Victory (1944). The audiences loved it and the film was profitable.

In 1945, Jeanne was cast in State Fair (1945) as Margie Frake who travels to the fair and falls in love with a reporter played by Dana Andrews. Now, Jeanne got a bigger contract and more recognition. Later that year, Jeanne married Paul Brooks on New Year's Eve. Although her mother wasn't supportive of the marriage, the union lasted until her husband's death and produced seven children. The year 1947 was an off year for Jeanne, as she took time off to bear the Brooks' first child.

In 1949, Jeanne appeared in three films, A Letter to Three Wives (1949), The Fan (1949), and Pinky (1949). It was this latter film which garnered her an Oscar nomination as Best Actress for her role as Pinky Johnson, a nurse who sets up a clinic in the Deep South. She lost to Olivia de Havilland for The Heiress (1949). Jeanne left Fox after filming Vicki (1953) in 1953, with Jean Peters. She had made 23 films for the studio that started her career, but she needed a well-deserved change. As with any good artist, Jeanne wanted to expand her range instead of playing the girl-next-door types.

She went briefly to Warner Brothers for the filming of Duel in the Jungle (1954) in 1954. The film was lukewarm at best. Jeanne, then, signed a contract, that same year, with Universal Studios with promises of better, high profile roles. She went into production in the film Man Without a Star (1955) which was a hit with audiences and critics. After The Joker Is Wild (1957) in 1957, Jeanne took time off for her family and to appear in a few television programs. She returned, briefly, to film in Guns of the Timberland (1960) in 1960. The films were sporadic after that. In 1967, she appeared in a low-budget suspense yarn called Hot Rods to Hell (1967). Her final film was as Clara Shaw in 1972's Skyjacked (1972).

Trivia:
Although frequently cast in musicals, she herself was not a singer. Louanne Hogan was specifically under contract so that she could dub the singing in all her musicals.

Played a character named Deborah in two Joseph L. Mankiewicz films: A Letter to Three Wives (1949) and People Will Talk (1951). Mankiewicz, who did not particularly care for Crain, once remarked, "I don't like the name Deborah, and I don't like Jeanne Crain."

"I loved being at the studio [20th Century-Fox]. After all, I started at 15, and I grew up there. But there comes a time when an actress stays too long in the same place. People get used to having you around, and they can't think of you in a different light."
Explore the simpler time of yesteryear...
A time when men and women were truly glamorous. A time when you could watch any movie with your children and not have to worry about gratuitous sex or violence – yet enjoy all the lustful inferences and edge-of-your-seat suspense.
Welcome to The Timeless Theater!
We're in the process of identifying which of our films are in the Public Domain, and offering these for sale on DVD.
​Please stay Tuned...!
Check out our new Film Noir Collection:
Coffee Mugs!
Phone Cases!
iPad Cases!
More coming soon!